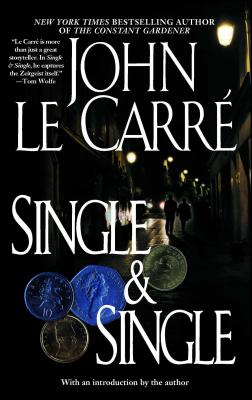 A lawyer from a London finance house is shot dead on a Turkish hillside by people with whom he thought he was in business. A children's magician in the English countryside is asked to explain the arrival of more than five million pounds sterling in his young daughter's modest trust.

In Single & Single, le Carré masterfully establishes a sequence of events whose connections are mysterious, complex and compelling. He tells of corrupt liaisons between criminal elements in the new Russian states and the world of legitimate finance in the West. He also paints an intimate portrait of two families: one Russian, the other English; one trading illicit goods, the other laundering the profits; one betrayed by a son-in-law, the other betrayed, and redeemed, by a son.

John le Carré was born in 1931. His third novel, The Spy Who Came in from the Cold, secured him a worldwide reputation, which was consolidated by the acclaim for his trilogy: Tinker, Tailor, Soldier, Spy; The Honorable Schoolboy; and Smiley’s People. His novels include The Constant Gardner, The Little Drummer Girl, A Perfect Spy, The Russia House, Our Game, The Tailor of Panama, and Single & Single. He lives in Cornwall, United Kingdom.

People Le Carré reveals a world at once deeply disquieting and oddly reassuring.

The New York Times Any reader who feared that the end of the Cold War would deprive Mr. le Carré of his subject can now feel a measure of relief. If anything, his subject of East-West misunderstanding has grown richer, and he now possesses vast new territories to mine.