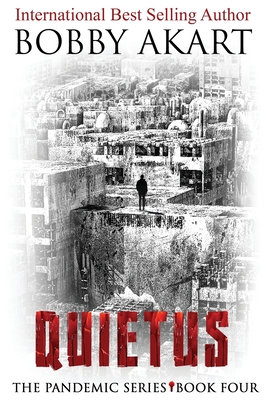 This is book number 4 in the Pandemic series.

There is no such thing as an ending, just a new beginning.
Throughout the millennia, extinction has been the norm and survival, the exception.
When faced with the hour of departure, will mankind fight to survive?
NOT ONLY WAS THERE A PATIENT ZERO, THERE WAS ALSO A LAST PATIENT.

IN BEGINNINGS, book one of The Pandemic Series, a deadly plague virus has been introduced across the glove by ISIS terrorists who are waging the mother of all wars - The Final Jihad. Dr. Mackenzie Hagan, a disease detective and epidemiologist at the CDC-Atlanta and Nathan Hunter, an off-the-books operative for the mysterious Project Artemis within the Department of Defense, join forces to both identify the disease, but also to locate its source.

In THE INNOCENTS, book two of The Pandemic Series, ISIS terrorists continued to wage the Final Jihad, infecting innocent people around the world. The highly contagious form of the plague has been genetically modified - to be the perfect killer.

In LEVEL 6, book three of The Pandemic Series, the pandemic has hit a brick wall, but not because it's burned itself out. Rather, it's running out of victims. Social distancing is the only way to avoid a gruesome fate. Unfortunately, in a dystopian world where resources are scarce and scavenging is a way of life, every moment away from where you live could result in your death from either the disease, or your fellow man.

QUIETUS concludes The Pandemic Series. For Mac and Hunter, and all mankind, there is no means of avoiding the final death blow brought about by the spread of the deadly plague virus. With every human contact, you run the risk of contracting the disease. Each surface you touch may have been contaminated by someone else. Every animal you encounter, or eat, could be contagious. Rules of survival have changed. Humans must adapt, or die.
This is an ingenious, inventive post apocalyptic dystopian thriller series about the threats we face from a global pandemic, and the use of infectious diseases by terrorists as they wage jihad around the world. Drawing on his unique talent to place the reader in a post-apocalyptic world, Bobby Akart delivers an explosive page-turner that has you wondering - will there be a last patient?
Note: The Pandemic Series does not contain strong language. It is intended to entertain and inform audiences of all ages, including teen and young adults. Although some scenes depict the realistic threat our nation faces from a worldwide pandemic, and the societal collapse which will result in the aftermath, it does not contain graphic scenes typical of other books in the post-apocalyptic genre.
I believe more of our young people need to lead a preparedness lifestyle. Studies show that our millennials do not have any of the basic survival skills. By writing this series free of vulgarities and gratuitous sexual innuendo, I've intended it to be suitable for everyone. Thanks.
_______________________________________________
BOOKS IN THE PANDEMIC SERIES:
BEGINNINGS - Available Now
THE INNOCENTS - Available Now
LEVEL 6 - Available Now
QUIETUS - Available Now