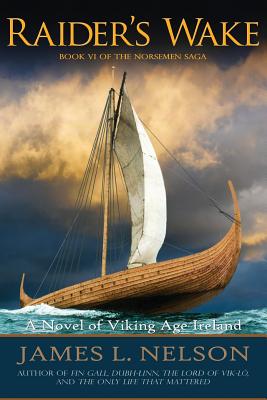 After the treachery and slaughter they met during the raid on Glendalough, Thorgrim Night Wolf and his small band of surviving Northmen have returned to V k-l where Thorgrim again sits as lord of the Viking longphort. But the Northmen are a restless lot, and soon they find themselves eager to put to sea. Loading weapons and supplies aboard the four longships under Thorgrim's command, they set out in search of the rich merchant ships that now ply Irish waters. But not all cargoes are the same, nor all merchant captains easy targets for the Norse raiders. Crossing wakes with a Frisian shipmaster who could be Thorgrim's equal in seamanship and cunning, the Northmen soon find themselves seeking vengeance even as they fight to keep from a watery grave.

Jim Nelson was born and raised in Maine and graduated from UCLA with a degree in motion picture/television production. Finding that despite being in Southern California, it was a damp, drizzly November in his soul, Jim took the cure Melville recommended and decided to sail about a little and see the watery part of the world. For six years he worked on board traditional sailing ships before launching a writing career as in 1994. He has since written more than twenty works of maritime fiction and history. He is the winner or the American Library Association/William Young Boyd Award and the Naval Order's Samuel Eliot Morison Award. Nelson has lectured all over the country and appeared on the Discovery Channel, History Channel and BookTV. He currently lives in Harpswell, Maine, with his former shipmate, now wife Lisa and three of their four children.