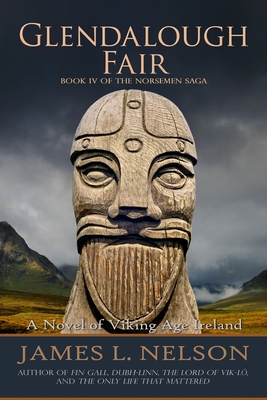 This is book number 4 in the Norsemen Saga series.

Spring has come to Ireland, where Thorgrim Night Wolf, new-made Lord of V k-l , and the three hundred Viking warriors under his command have suffered through a brutal winter. Despite having accomplished much during the months of cold and rain, the patience of the men has worn thin and anger and frustration threaten to tear the ships' crews apart. But just as the men are turning on one another, a local Irish lord arrives with a proposal, a plan for Irish and Norse to join together in a raid using Ireland's rivers to float their longships far inland. The plan, however, soon turns into a nightmare of massacre and betrayal, and Thorgrim and his band must fight both the surprisingly skilled commander of the local forces as well as enemies in their own camp. It's a fight in which victory or defeat will mean the difference between riches or death.

Jim Nelson was born and raised in Maine and graduated from UCLA with a degree in motion picture/television production. Finding that despite being in Southern California, it was a damp, drizzly November in his soul, Jim took the cure Melville recommended and decided to sail about a little and see the watery part of the world. For six years he worked on board traditional sailing ships before launching a writing career as in 1994. He has since written more than twenty works of maritime fiction and history. He is the winner or the American Library Association/William Young Boyd Award and the Naval Order's Samuel Eliot Morison Award. Nelson has lectured all over the country and appeared on the Discovery Channel, History Channel and BookTV. He currently lives in Harpswell, Maine, with his former shipmate, now wife Lisa and three of their four children.