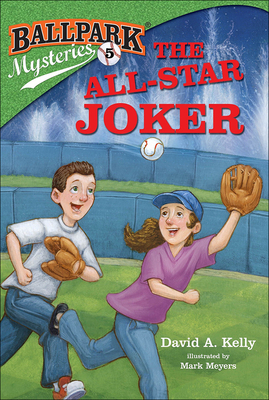 This is book number 5 in the Ballpark Mysteries series.

Next up to the plate--book #5 in our early chapter book mystery series, where each book is set in a different American ballpark
The stars are out in Kansas City . . . the "baseball" stars, that is Mike and Kate are at the All-Star game, and even get to go on the field during the Home Run Derby to catch pop-ups That's where they meet Andy, whose dad, Josh Robinson, is an All-Star catcher. But before the Home Derby ends, Josh finds himself in hot water. Someone is playing practical jokes on the other players, and the coach is sure it's him. Andy swears his dad is innocent. Who would want to frame Josh? And why?
"The All-Star Joker" includes a fun fact page about Kansas City's stadium.
Cross Ron Roy's A to Z mystery series with Matt Christopher's sports books and you get the Ballpark Mysteries: fun, puzzling whodunnits aimed at the younger brothers and sisters of John Feinstein's fans.

DAVID A. KELLY has written for many newspapers and magazines, and "Babe Ruth and the Baseball Curse, " published in spring 2009, was his first book for children. He lives fifteen minutes from Fenway Park in Newton, Massachusetts, with his wife, Alice; two sons, Steven and Scott; and a dog named Sam.

MARK MEYERS grew up in Utah and studied art in San Francisco at the Academy of Art University.