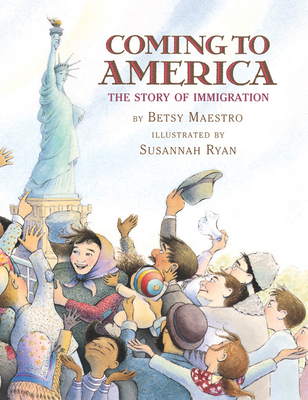 By Betsy Maestro, Susannah Ryan (Illustrator)
$17.99
In Our Warehouse - Expected arrival in 2-5 days

Thousands of years ago, the first people to arrive on American soil traveled across a land bridge from Asia to what is now Alaska. Millions of people were already settled when Christopher Columbus "rediscovered" America in 1492. New about the "new" world soon spread, and more people arrived on American shores. The trans-atlantic journey was long and arduous, but by 1700, French, English, Spanish, Portuguese and Dutch colonies had been established. This expansion exacted a toll, however, on the native people who were pushed off their land as well as African people who were forced into slavery. By the mid 1800's, so many people had immigrated to the United States that in 1892, an immigration office was opened on Ellis Island to count and document the new arrivals. By the early 1900's, laws were passed to limit the number of new arrivals. And yet, today, immigrants still come to America from countries worldwide, includingRussia, Haiti, and Cuba, insearch of a better way of life. The history of American immigration is one of determination and struggle, but not without pain. But for immigrants past and present, hope, the belief in a better life, and the allure of making a contribution to this nation prevails.

Betsy Maestro was born in Brooklyn, New York, in 1944. Inspired by her mother, who taught nursery school and went on to be a school guidance counselor and administrator, Maestro always wanted to be a teacher, and in preparation she filled her high school summer vacations with jobs baby-sitting, tutoring, and even supervising playgrounds. She received a Bachelor's degree in Early Childhood Education at Southern Connecticut State College and a Master's degree in Elementary Guidance from the same institution. Maestro taught kindergarten and first grade for 11 years, during which time she became aware of the need for imaginative nonfiction to spark children's interests.

After marrying artist Giulio Maestro in 1972, Maestro decided to try writing herself. Since then the couple has collaborated on more than 50 books for children, all of them picture books, many of them nonfiction and concept books. They have received numerous awards and citations for their work. When she is not writing, Betsy Maestro enjoys reading, cooking, photography, travel, art, and antiques. She and her husband have two children and live in Old Lyme, Connecticut.

"A useful overview of a complex issue, attractively designed and clearly written." - SLJ"Clearly tuned into her audience, Maestro offers a neatly distilled overview of US immigration, covering extensive ground without oversimplifying." - PW

"A useful overview of a complex issue, attractively designed and clearly written." - SLJ"Clearly tuned into her audience, Maestro offers a neatly distilled overview of US immigration, covering extensive ground without oversimplifying." - PW