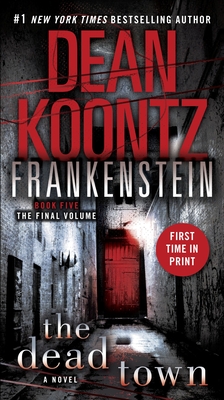 This is book number 5 in the Frankenstein series.

Dean Koontz’s enthralling Frankenstein series has redefined the classic legend of infernal ambition and harrowing retribution for a new century and a new age. Now the master of suspense delivers an unforgettable novel that is at once a thrilling adventure in itself and a mesmerizing conclusion to his saga of the modern monsters among us.

The war against humanity is raging. As the small town of Rainbow Falls, Montana, comes under siege, scattered survivors come together to weather the onslaught of the creatures set loose upon the world. As they ready for battle against overwhelming odds, they will learn the full scope of Victor Frankenstein’s nihilistic plan to remake the future—and the terrifying reach of his shadowy, powerful supporters.

Now the good will make their last, best stand. In a climax that will shatter every expectation, their destinies and the fate of humanity hang in the balance.

Dean Koontz, the author of many #1 New York Times bestsellers, lives in Southern California with his wife, Gerda, their golden retriever, Elsa, and the enduring spirit of their goldens, Trixie and Anna.

“Koontz is a master of the edge-of-your-seat, paranoid thriller and perhaps the leading American practitioner of the form.”—The Star-Ledger

“A rarity among bestselling writers, Koontz continues to pursue new ways of telling stories, never content with repeating himself. He writes of hope and love in the midst of evil in profoundly inspiring and moving ways.”—Chicago Sun-Times