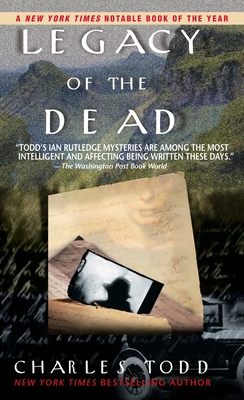 By Charles Todd
Email or call for price.
Backordered

This is book number 4 in the Inspector Ian Rutledge series.

The weathered remains found on a Scottish mountainside may be those of Eleanor Gray, but the imperious Lady Maude Gray, Eleanor's mother, will have to be handled delicately. This is not the only ground that Inspector Ian Rutledge of Scotland Yard must tread carefully, for the case will soon lead him to Scotland, where many of Rutledge's ghosts rest uneasily. But it is an unexpected encounter that will hold the most peril.

For in Scotland Rutledge will find that the young mother accused of killing Eleanor Gray is a woman to whom he owes a terrible debt. And his harrowing journey to find the truth will lead him back through the fires of his past, into secrets that still have the power to kill.

Charles Todd is the author of A Test of Wills, Wings of Fire, and Search the Dark. He lives on the East Coast, where he is at work on the next novel in the Inspector Ian Rutledge series, Watchers of Time.

A New York Times Notable Book of the Year

"Todd's Ian Rutledge mysteries are among the most intelligent and affecting being written these days."
-- The Washington Post Book World

"With his tortured detective Ian Rutledge and the ghost who inhabits his mind ... Charles Todd has swiftly become one of the most respected writers in the mystery genre.... The pair is unique among sleuths."
-- The Denver Post

"Tightly worked, poignant ... a most moving story."
-- Booknews from The Poisoned Pen

and coming soon in hardcover: