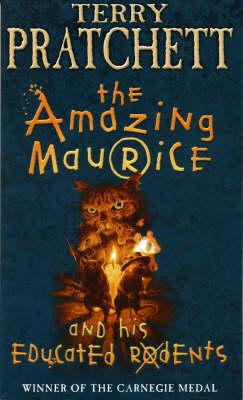 Is Discworld ready for educated rats?

Set in the Discworld, a brand new and marvellously eccentric fantasy tale for young readers.

Maurice, an amazing cat, who has survived four years on the toughest streets in the whole of the Discworld, reckons that rats are dumb. Clever, OK, but dumb. Maurice, however, is smart -- smart enough to recognize that there’s a new kind of rat around; rats that have been eating wizards’ rubbish and can now talk. And Maurice is also smart enough to get a pretty amazing idea when he spots a kid playing the flute. Now he has his very own Pied Piper to go with his “plague of rats”. And Maurice’s money-bags are getting fuller and fuller. That is, until the group reaches the far flung village of Bad Blintz.

Terry Pratchett is Britain s bestselling living novelist. He lives behind a keyboard in Wiltshire and says he doesn t want to get a life, because it feels as though he s trying to lead three already . He was appointed OBE in 1998. He is the author

of the phenomenally successful "Discworld" series."