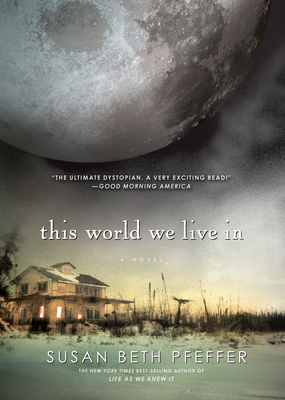 By Susan Beth Pfeffer
$9.99
Email or call for price.

This is book number 3 in the Life As We Knew It Series series.

It’s been a year since a meteor collided with the moon, catastrophically altering the earth’s climate. For Miranda Evans, life as she knew it no longer exists. Her friends and neighbors are dead, the landscape is frozen, and food is increasingly scarce.

The struggle to survive intensifies when Miranda’s father and stepmother arrive with a baby and three strangers in tow. One of the newcomers is Alex Morales, and as Miranda’s complicated feelings for him turn to love, his plans for his future thwart their relationship. Then a devastating tornado hits the town of Howell, and Miranda makes a decision that will change their lives forever.

"The protagonists of Pfeffer's novels The Dead and the Gone and Life As We Knew It join forces in this third installment of a harrowing saga set in the not so distant future. A year after the moon was thrown off course by a meteor, natural disasters and climate changes on Earth are still making mere existence a challenge...Throughout, readers will be moved by displays of compassion, strength, and faith as characters endure grim realities and face an uncertain future."  —Publishers Weekly, starred review "Palpable despair is dappled with tiny flares of hope in this third entry in Pfeffer’s enthralling series about the aftereffects of a meteor strike on the Moon that has altered the earth’s gravitational pull...fans of the first two will thrill to this latest and the loose ending will leave them hoping for more."  —Kirkus —