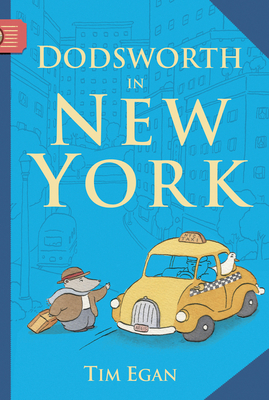 Dodsworth wanted adventure. He wanted to see the world. He especially wanted to visit New York City. What he didn’t want was to be joined by a duck. A crazy duck. A duck that misbehaves. Young readers will laugh out loud at the duck’s silly antics as Dodsworth has the unexpected adventure of his life in the Big Apple . . . and beyond.

Tim Egan is the author and illustrator of several offbeat and humorous tales for children. Born in New Jersey, Tim moved to California to attend the Art Center College of Design in Pasadena, California. He still lives in southern California with his wife, Ann, and their two sons. To learn more about Tim Egan, visit his Web site at www.timegan.com.

"The troublemaking duck...is an amusing character...the matter-of-fact compact sentences gain readability as well as humor from their simplicity." Bulletin October2007 Bulletin of the Center for Children's Books