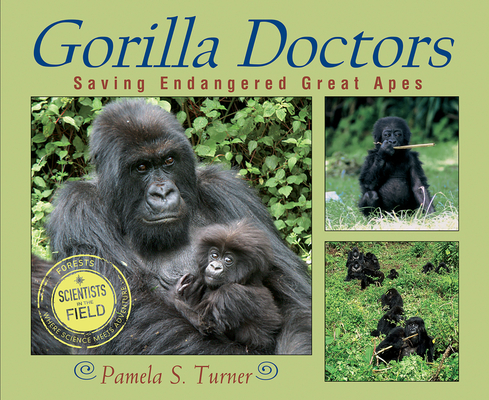 Mountain gorillas are playful, curious, and protective of their families. They are also one of the most endangered species in the world. For years, mountain gorillas have faced the threat of death by poachers. Funds raised by “gorilla tourism”—bringing people into the forest to see gorillas—have helped protect them. This tourism is vital, but contact between gorillas and people brought a new threat to the gorillas: human disease. The Mountain Gorilla Veterinary Project is a group of scientists working to save the mountain gorilla population in Rwanda and Uganda. The gorilla doctors study the effects of human exposure, provide emergency care, and act as foster parents to an orphaned gorilla.

Pamela S. Turner has a master’s degree in public health from the University of California, Berkeley, and a special interest in microbiology and epidemiology. Her articles for children and adults have appeared in numerous scientific publications. Her books include Hachiko: The True Story of a Loyal Dog, Gorilla Doctors, The Frog Scientist, Dolphins of Shark Bay, and Project Seahorse. She lives in California.
www.pamelasturner.com

The readable text records their efforts to treat the great apes in the field as they encounter poachers, meet with loss of habitat, and face their newest threat: human diseases that can cross species lines. . . . The whole is accompanied by striking, full-color photographs and includes a list of other resources, a postscript, and an index." School Library Journal, Starred

"[An] enjoyable and often enlightening read. Turner has a light touch that never undercuts the fundamental seriousness of her subject, and she quietly makes the local people, who have to deal with the gorillas marauding through their farms but also benefit from gorilla tourism, important figures in the account along with the scientists." Bulletin of the Center for Children's Books

"Veterinarians in east central Africa who “make house calls—or rather, forest calls” to mountain gorillas are the focus of this entry in the excellent Scientists in the Field series." Booklist, ALA —