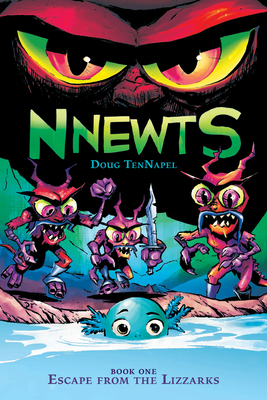 This is book number 1 in the Nnewts series.

A little hero faces big challenges in the first book of this totally unique fantasy-adventure series.
The first book in the Nnewts series follows the story of Herk, a lovable Nnewt who longs for stronger legs, something his mother and father wish they could give him. When his quaint village is attacked by the reptile Lizzarks, he's forced to flee his home and leave behind the only life he's ever known. Now, all alone and on the run, Herk navigates a dangerous world filled with strange creatures and mysterious wonders, where friends are few and an evil lord is in hot pursuit.

Doug TenNapel was raised in the town of Denair, California. In 1994, he created the popular Earthworm Jim. Doug's graphic novel GHOSTOPOLIS was a 2011 ALA Top Ten Great Graphic Novel for Teens, and his follow-up, BAD ISLAND, was a 2012 ALA Great Graphic Novels for Teens as well as one of School Library Journal's Top 10 Graphic Novels of 2011. Doug lives in Franklin, Tennessee.

"TenNapel is a terrific cartoonist and in fine form here."--BOOKLIST

*"A clever, old-fashioned adventure with some modern twists and a light-hearted tone, this, like TenNapel's previous work, is not to be missed."--BOOKLIST, starred review

"[TenNapel] provides moments of great sweetness and heaps and heaps of bizarre fun, a quality that has become his veritable trademark."--BOOKLIST

"TenNapel unleashes an array of charmingly off-kilter characters and has mastered a cartoonish style that preserves a sense of grit while lending some emotional weight to match the story."--BOOKLIST

"It's a premise worthy of a loony Saturday morning cartoon, complete with bulgy-eyed characters that nearly bounce off the full-color pages, but underlying the fun is a potent and affecting story about facing death and growing up."--PUBLISHERS WEEKLY

"Unpredictable and engaging, this will be a popular pick for reluctant readers and graphic-novel fans."--SCHOOL LIBRARY JOURNAL