Zane and the Hurricane: A Story of Katrina (Hardcover) 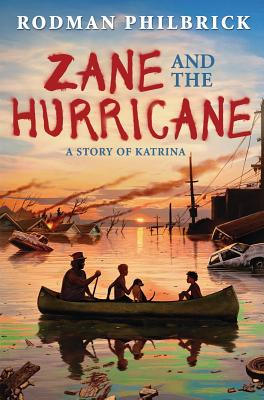 By Rodman Philbrick
$16.99
Email or call for price.

Newbery Honor author Rodman Philbrick presents a gripping yet poignant novel about a 12-year-old boy and his dog who become trapped in New Orleans during the horrors of Hurricane Katrina.

Zane Dupree is a charismatic 12-year-old boy of mixed race visiting a relative in New Orleans when Hurricane Katrina hits. Unexpectedly separated from all family, Zane and his dog experience the terror of Katrina's wind, rain, and horrific flooding. Facing death, they are rescued from an attic air vent by a kind, elderly musician and a scrappy young girl--both African American. The chaos that ensues as storm water drowns the city, shelter and food vanish, and police contribute to a dangerous, frightening atmosphere, creates a page-turning tale that completely engrosses the reader. Based on the facts of the worst hurricane disaster in U.S. history, Philbrick includes the lawlessness and lack of government support during the disaster as well as the generosity and courage of those who risked their lives and safety to help others. Here is an unforgettable novel of heroism in the face of truly challenging circumstances.

Rodman Philbrick’s most recent novel, THE MOSTLY TRUE ADVENTURES OF HOMER P. FIGG, received numerous awards and was chosen as a Newbery Honor Book. His first book for young readers, FREAK THE MIGHTY, was an immediate bestseller and continues to be a classic, with close to three million copies in print. His highly acclaimed titles include THE YOUNG MAN AND THE SEA; THE LAST BOOK IN THE UNIVERSE; and THE FIRE PONY. Philbrick divides his time between Maine and Florida. Visit him at www.rodmanphilbrick.com.

THE MOSTLY TRUE ADVENTURES OF HOMER P. FIGG
A Newbery Honor Book
A Kentucky Bluegrass Award Nominee
An Oppenheim Toy Portfolio Platinum Award Winner
A New York Public Library's CHILDREN'S BOOKS 2009--100 TITLES FOR READING AND SHARING
A CBC/NCSS Notable Social Studies Trade Books for Young People 2010
* "The book wouldn't be nearly as much fun without Homer's tall tales, but there are serious moments, too, and the horror of war and injustice of slavery ring clearly above the din of playful exaggerations."--PUBLISHERS WEEKLY, starred review

THE YOUNG MAN AND THE SEA
A Capitol Choice
A Cooperative Children's Book Center Choice
A SCHOOL LIBRARY JOURNAL Best Book and starred review
"Readers will be hooked."--KIRKUS REVIEWS

THE LAST BOOK IN THE UNIVERSE
A Bank Street College of Education Best Children's Books of the Year
A VOYA Best Science Fiction, Fantasy, and Horror Book
A National Council for the Social Studies NCSS Notable Book
A YALSA Best Books for Young Adults
"Philbrick has outdone himself. . . . . this futuristic novel will stimulate thought and discussion among contemporary readers."--VOYA

THE FIRE PONY
A Capitol Choice
A Maryland Children's Book Award Winner
* "Crisply eventful, pungent in its descriptions, crackling with action, Philbrick has created a real dilly of a novel."--KIRKUS REVIEWS, starred review

School Library Journal Starred Review
A boy’s visit to meet his great-grandmother for the first time turns into a nightmare when Hurricane Katrina hits New Orleans. Twelve-year-old Zane has not known many family members other than his mother; after she makes contact with his deceased father’s grandmother, Zane travels to the oppressively humid city. When New Orleans is placed under a mandatory evacuation, Zane and his great-grandmother leave with his dog, Bandy, and her pastor; when Bandy is spooked by growling Dobermans, he leaps from the car, followed by Zane. Zane and Bandy endure the hurricane’s landfall and the failure of the levees at his great-grandmother’s house until they meet a young girl, Malvina, and her guardian, Tru. The trio canoes through the snake-infested waters seeking assistance. Arriving in a neighborhood protected by privately hired security forces leads to vicious threats from the armed guards, who are loading helicopters stuffed with rugs and other expensive items. After their canoe is stolen, they head to the chaos of the Superdome and eventually to a bridge connecting the city to Algiers, in which they hope to find Tru’s cousin. Vivid descriptions of the toxic waters, the commotion at the Superdome, and racial tension are handled factually yet sensitively. Information about unique New Orleans customs, including “jazz funerals,” its history of biracialism, and accents are occasionally inserted. The fast bond among Zane, Malvina, and Tru is believably drawn. A time line and facts about Hurricane Katrina and its aftermath are included.