A Plague of Bogles (How to Catch a Bogle #2) (Paperback) 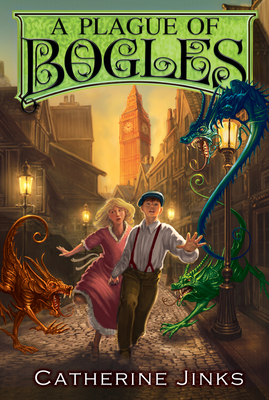 By Catherine Jinks
$6.99
In Our Warehouse - Expected arrival in 2-5 days

This is book number 2 in the How to Catch a Bogle series.

Jem Barbary spent most of his early life picking pockets for a wily old crook named Sarah Pickles—until she betrayed him. Now Jem wants revenge, but first he needs a way to earn his living. He’d like to work for the bogler Alfred Bunce, who kills the child-eating monsters that lurk in the cellars and sewers of old London. But Alfred has wanted to give up bogling ever since he almost lost his last apprentice, Birdie McAdam.

As more and more children disappear under mysterious circumstances, though, Alfred, Jem, and Birdie find themselves waging an underground war. Soon they discover that there’s only one thing more terrifying than facing a whole plague of bogles: facing the sinister people from Jem’s past . . .

Catherine Jinks grew up in Papua New Guinea and now resides in New South Wales, Australia. She is a three-time winner of the Children's Book Council of Australia Book of the Year award and has received the Centenary Medal for her contribution to Australian children's literature. Her popular works for young readers include the Evil Genius series, The Reformed Vampire Support Group, and the trilogy that began with How to Catch a Bogle.
Visit her website at www.catherinejinks.com.

"Well paced and with details and dialogue that transport readers to the streets (and sewers) of Victorian London, there is much to enjoy in this excellent adventure series."
—School Library Journal

"With a linear narrative, plenty of action and dialogue, and an ample smattering of colorful Victorian street language, this is a speedy, characterful yarn."
—Horn Book Magazine

"Jinks reprises her previous bogle-ish title with lots of action and an undercurrent of sly humor, supplying return readers with all the gory monster-vanquishing they have come to expect...Sounds like another winner in the works."
—Bulletin