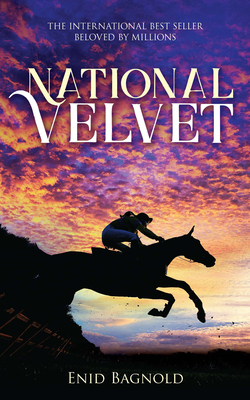 Put on your not-to-be-missed list. -- The New Yorker Her mother calls it a breathtaking piece of folly, but fourteen-year-old Velvet Brown is determined: every night she prays to be the best rider in England, and every day she trains to win the world's most famous steeplechase, the Grand National. No woman has ever competed in the race, let alone won it. Velvet is skinny and frail, and her mount is a rough country horse that she won in a raffle. But she whispers her hopes and dreams into his ear, and the horse flies over fences at her command.
Generations of readers of all ages have thrilled to the tale of Velvet's grit and determination and its inspiring example of the struggles and rewards of following a dream. A richly atmospheric portrait of rural life between the World Wars, National Velvet was a selection of the Book-of-the-Month Club in the United States and the Book Society in England upon its 1935 debut. It also served as the basis for the popular movie starring Elizabeth Taylor and Mickey Rooney. This charming new edition features the original drawings by Laurion Jones, the author's thirteen-year-old daughter. The book is one that horse lovers of every age cannot fail to enjoy. -- The New York Times Humorous, charming, National Velvet is a little masterpiece. -- Time This book deserves a top place on your shelf. -- Christian Science Monitor

The daughter of an English army officer, Enid Bagnold (1889-1981) grew up in Jamaica, attended schools in England and France, and served with the British women's services during World War I. After her marriage to Sir Roderick Jones, the millionaire head of Reuters, she became a society hostess and mother of four. Bagnold is the author of several novels and plays, including The Chalk Garden.