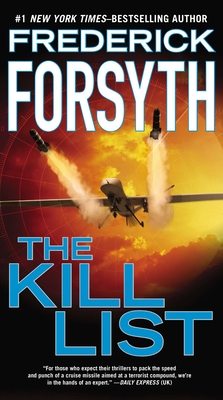 By Frederick Forsyth
Email or call for price.
Not Available at This Time

In northern Virginia, a secret agency named TOSA (Technical Operations Support Activity) has one mission: to track, find, and kill those so dangerous to the United States that they are on a short, very close-held document known as the Kill List.

Now a new name has been added: a terrorist of frightening effectiveness called the Preacher, who radicalizes young Muslims living abroad to carry out assassinations. Unfortunately for him, one of his targets is a retired Marine general, whose son is TOSA’s top tracker of men.

The Preacher has made it personal—and now the hunt is on….

Frederick Forsyth is the author of sixteen novels and short story collections, from The Day of the Jackal, The Odessa File, and The Dogs of War to, most recently, The Afghan and The Cobra. A former pilot and print and television reporter for Reuters and the BBC, he has had five movies and a television miniseries made from his works. In 2012, he won the Diamond Dagger Award from the Crime Writers’ Association for a career of sustained excellence. He lives in Buckinghamshire, England.

“A story that’s AS CURRENT AS TOMORROW’S HEADLINES.”—Mobile Press-Register

“A HIGH-STAKES THRILLER…The Kill List is intense to the very end.”—Midwest Book Review

“Forsyth’s new thriller proves he has lost none of his powers…[He] remains THE MASTER OF HIS TRADE.”—Daily Express (UK)