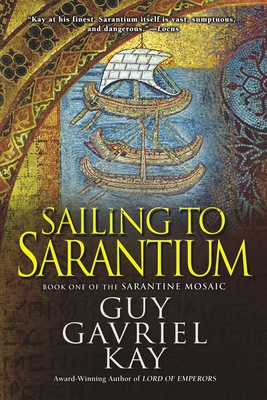 This is book number 1 in the Sarantine Mosaic series.

Sarantium is the golden city: holy to the faithful, exalted by the poets, jewel of the world and heart of an empire.

Caius Crispus, known as Crispin, is a master mosaicist, creating beautiful art with colored stones and glass. Still grieving the loss of his family, he lives only for his craft—until an imperial summons draws him east to the fabled city. Bearing with him a Queen’s secret mission and seductive promise, and a talisman from an alchemist, Crispin crosses a land of pagan ritual and mortal danger, confronting legends and dark magic.

Once in Sarantium, with its taverns and gilded sanctuaries, chariot races and palaces, intrigues and violence, Crispin must find his own source of power in order to survive. He finds it, unexpectedly, high on the scaffolding of his own greatest creation.

Guy Gavriel Kay is the international bestselling author of numerous fantasy novels including The Fionavar Tapestry trilogy, Tigana, The Last Light of the Sun, Under Heaven, River of Stars, and Children of Earth and Sky. He has been awarded the International Goliardos Prize for his work in the literature of the fantastic, and won the World Fantasy Award for Ysabel in 2008. In 2014 he was named to the Order of Canada, the country’s highest civilian honor. His works have been translated into more than twenty-five languages.

Praise for Sailing to Sarantium

“Kay at his finest. Sarantium itself is vast, sumptuous, and dangerous.”—Locus

“Once again, Guy Gavriel Kay has taken a period of history and transformed it into something magical.”—Lisa Goldstein, author of The Red Magician

“Sailing to Sarantium confirms, yet again, Kay’s status as one of our most accomplished and engaging storytellers.”—Toronto Star

“For some time now, Guy Gavriel Kay has been recognized as one of the finest writers of high fantasy in the world. Now, he has achieved one of the finest works of historical fantasy...in years. Kay has constructed his novel as a literary mosaic of great intricacy and delicacy.”—Edmonton Journal

More Praise for the Novels of Guy Gavriel Kay

“History and fantasy rarely come together as gracefully or readably as they do in the novels of Guy Gavriel Kay.”—The Washington Post Book World

“Kay shows why he’s the heir to Tolkien’s tradition.”—Booklist

“Kay is a genius. I've read him all my life and am always inspired by his work.”—#1 New York Times bestselling author Brandon Sanderson

“A storyteller on the grandest scale.”—Time Magazine, Canada