The Key to Rebecca (Paperback) 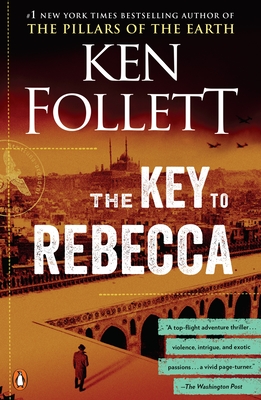 Ken Follett’s The Key to Rebecca took readers and critics by storm when first published more than twenty years ago. Today, it remains one of the best espionage novels ever written. Look out for Ken's newest book, A Column of Fire, available now.

A brilliant and ruthless Nazi master agent is on the loose in Cairo. His mission is to send Rommel’s advancing army the secrets that will unlock the city’s doors. In all of Cairo, only two people can stop him. One is a down-on-his-luck English officer no one will listen to. The other is a vulnerable young Jewish girl. . . .

Ken Follett is one of the world’s best-loved authors, selling more than 160 million copies of his thirty books. Follett’s first bestseller was Eye of the Needle, a spy story set in the Second World War.

In 1989 The Pillars of the Earth was published, and has since become the author’s most successful novel. It reached number one on bestseller lists around the world and was an Oprah’s Book Club pick.

Its sequels, World Without End and A Column of Fire, proved equally popular, and the Kingsbridge series has sold 38 million copies worldwide.

Follett lives in Hertfordshire, England, with his wife Barbara. Between them they have five children, six grandchildren, and three Labradors.

“From the opening sentence to the gripping climax . . . Ken Follett delivers the surefire suspense readers have come to expect.” —Los Angeles Times

“It can keep you up all night—grabbed, gripped, and thrilled.” —Chicago Sun-Times

“The most exciting novel in years.” —The Cincinnati Enquirer