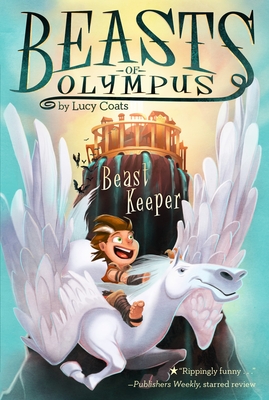 This is book number 1 in the Beasts of Olympus series.

Beasts of Olympus is a series of 144-page illustrated chapter books set in a magical Ancient Greece where strange things still walk the Earth. Beast Keeper tells the story of Pandemonius (a.k.a. "Demon," the half-god son of Pan) who, on his tenth birthday, is called upon to look after all the mythical creatures that belong to the stables of Olympus.

Lucy Coats studied English and Ancient History at Edinburgh University, then worked in children's publishing and now writes full time. She is a gifted children's poet and has also written several picture book texts. She is widely respected for her lively retellings of myths. Her 12-book series, Greek Beasts and Heroes, was published by Orion in the U.K. Beasts of Olympus will be her first U.S. publication. Lucy's website is at www.lucycoats.com. You can also follow her on Twitter @lucycoats.