A Dog's Life: The Autobiography of a Stray (Scholastic Gold) (Paperback) 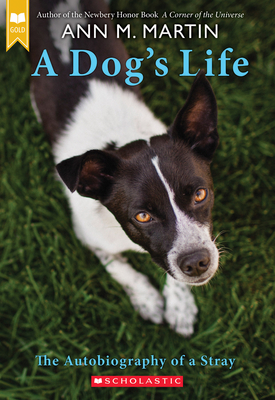 Squirrel and her brother Bone begin their lives in a toolshed behind someone's summer house. Their mother nurtures them and teaches them the many skills they will need to survive as stray dogs. But when their mother is taken from them suddenly and too soon, the puppies are forced to make their own way in the world, facing humans both gentle and brutal, busy highways, other animals, and the changing seasons. When Bone and Squirrel become separated, Squirrel must fend for herself, and in the process makes two friends who in very different ways define her fate.

Ann M. Martin is the creator of The Baby-sitters Club, which has more than 180 million books in print, making it one of the most popular series in the history of publishing. Her novels include A Corner of the Universe (a Newbery Honor Book), Belle Teal, Here Today, A Dog’s Life, On Christmas Eve, and the Main Street and Family Tree series, as well as the much-loved collaborations P.S. Longer Letter Later and Snail Mail No More, with Paula Danziger. Ann lives in upstate New York.

PW 8/22/05**STARRED**********
Martin's (A Corner of the Universe ) winsome novel, written from a canine's point of view, is sure to melt the hearts of animal lovers, as she traces the dog days of a stray named Squirrel from birth to old age. The pooch spends his first few months safe and warm inside a shed. She first ventures out into the larger, more threatening world after her mother disappears and brother Bone decides it is time to explore the woods. From then on, life becomes a battle of survival for Squirrel, scrounging for food, avoiding busy streets and remaining wary of humans who may or may not be friendly. During her life, Squirrel gets separated from her brother, finds and loses a canine companion named Moon, and stumbles upon a handful of temporary owners who do not always prove to be loyal. Besides offering a glimpse of how strays learn to fend for themselves, this saga of a lonely dog delivers a subtle but strong message to potential dog owners, conveying the negative effects of neglecting, ditching or abusing a pet. After following Squirrel's harrowing encounters with freezing temperatures, dangerous enemies and near starvation, readers will utter a sigh of relief when she finds a human who needs Squirrel as much as Squirrel needs her. Ages 9-12. (Oct.)

Kirkus 9/1/05
A DOG'S LIFE
The Autobiography of a Stray
Following the tradition of other realistic animal stories, this moving account of a stray dog's life experiences is told from the canine perspective. Born in a garden shed, Squirrel and her brother Bone are raised by their mother, who teaches them to hunt and avoid humans. Life is good for the puppies until their mother disappears and doesn't return. When the adventurous Bone sets out into the world, Squirrel follows, afraid to be on her own. But along a busy highway, the puppies are soon separated forever and Squirrel is alone. She manages to survive winter and finds Moon, another stray. The two travel together, raiding garbage cans, eluding dogcatchers and fighting off a band of hungry dogs until Moon is killed by a truck. Alone again, Squirrel stoically moves from town to town, encountering both kind and cruel humans, and aging as the seasons pass. Speaking matter-of-factly, Squirrel accepts life bravely and in the end, finds the loving home she deserves. Heart-wrenching as well as heart- warming. (Fiction. 10-14)