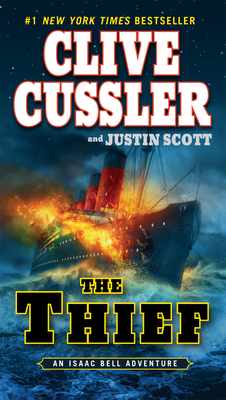 By Clive Cussler, Justin Scott
$9.99
In Our Warehouse - Expected arrival in 2-5 days

This is book number 5 in the An Isaac Bell Adventure series.

Turn-of-the-century detective Isaac Bell matches wits with a German spy just as the world inches closer to global warfare in this novel in the #1 New York Times-bestselling series.

It's 1910 and Chief Investigator Isaac Bell, along with fellow Van Dorn detective, Archie Abbott, is escorting a Wall Street stock swindler to his trial in New York aboard the ocean liner Mauretania. Pair intend to enjoy the open sea and make use of the leisure time to plan Bell’s wedding to Miss Marion Morgan, but are forced to change plans when two European scientists are nearly abducted and forced overboard. Bell springs into action just in time to stop the kidnapping, but his new charges are convinced they are still at risk. There’s something in their possession, an historic invention, and there’s a German munitions trust that will stop at nothing to steal it.

For war clouds are looming, and a ruthless espionage agent has spotted an opportunity to give the German Empire an edge in the coming conflict. What’s worse, Bell’s already a step behind. He’s made the mistake of assuming it’s some sort of war machine. But not all weapons are meant for the battlefield…

Clive Cussler is the author of more than fifty books in five bestselling series, including Dirk Pitt, NUMA Files, Oregon Files, Isaac Bell, and Fargo. His life nearly parallels that of his hero Dirk Pitt. Whether searching for lost aircraft or leading expeditions to find famous shipwrecks, he and his NUMA crew of volunteers have discovered more than seventy-five lost ships of historic significance, including the long-lost Confederate submarine Hunley, which was raised in 2000 with much press publicity. Like Pitt, Cussler collects classic automobiles. His collection features more than eighty examples of custom coachwork. Cussler lives in Arizona and Colorado.

Justin Scott is the author of thirty-one novels, including The Shipkiller and Normandie Triangle; the Ben Abbott detective series; six thrillers under his pen name Paul Garrison; and his coauthorship with Cussler of The Wrecker, The Spy,The Race, The Thief, The Striker, The Bootlegger, The Assassin, The Gangster and The Cutthroat. Scott lives in Connecticut.

“Bell just keeps getting more interesting. Cussler is turning out some of his best work.” —Booklist