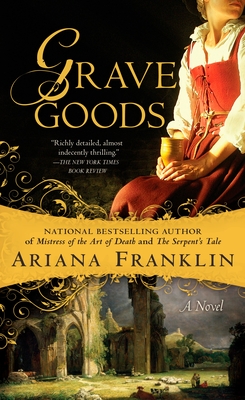 “The bones of Arthur and Guinivere have been found at Glastonbury Abbey, the land of fabled Avalon. King Henry II sends his 'Mistress of the Art of Death' to verify the find, and Franklin has written a story that is vivid and full of danger. She trumps television watching every time!”
— Becky Milner, Vintage Books, Vancouver, WA

When a fire at Glastonbury Abbey reveals two skeletons, rumor has it they may belong to King Arthur and Queen Guinevere. King Henry II hopes so, for it would help him put down a rebellion in Wales, where the legend of Celtic savior Arthur is strong. To make certain, he sends Adelia Aguilar, his Mistress of the Art of Death, to Glastonbury to examine the skeletons.

At the same time, the investigation into the abbey fire will be overseen by the Bishop of St. Albans, father of Adelia's daughter. Trouble is, someone at Glastonbury doesn't want either mystery solved, and is prepared to kill to prevent it...

Ariana Franklin is the pen name of British writer Diana Norman. A bestselling author and former journalist, she lives in England with her husband, the film critic Barry Norman.