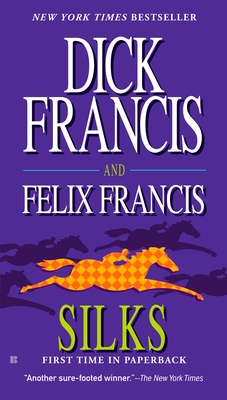 By Dick Francis, Felix Francis
$9.99
In Our Warehouse - Expected arrival in 2-5 days

A lawyer and amateur jockey is torn between doing what’s right and what will keep him alive in this New York Times bestselling thriller from Dick and Felix Francis.

Geoffrey Mason wasn’t terribly disappointed when his client Julian Trent was found guilty. Despite being paid handsomely as Trent’s defense counsel, he believes Trent needs to be locked up for a good long time. He only wishes it had happened more quickly—if the trial had ended just a bit earlier, Mason could have made it to the Foxhunter Steeplechase and fulfilled his longtime dream as an amateur jockey.

But not long afterward, Trent is set free when witnesses and jurors start recanting—under intimidation, Mason suspects. Remembering Trent’s threats at the time of his conviction, Mason is none too happy. And things only get worse when one of Mason’s fellow jockeys is found dead...

Dick Francis was born in South Wales in 1920. He was a young rider of distinction winning awards and trophies at horse shows throughout the United Kingdom. At the outbreak of World War II he joined the Royal Air Force as a pilot, flying fighter and bomber aircraft including the Spitfire and Lancaster. He became one of the most successful postwar steeplechase jockeys, winning more than 350 races and riding for Her Majesty Queen Elizabeth, the Queen Mother. After his retirement from the saddle in 1957, he published an autobiography, The Sport of Queens, before going on to write more than forty acclaimed books. A three-time Edgar Award winner, he also received the prestigious Crime Writers’ Association’s Cartier Diamond Dagger, was named Grand Master by the Mystery Writers of America, and was awarded a CBE in the Queen’s Birthday Honours List in 2000. He died in February 2010, at age eighty-nine, and remains among the greatest thriller writers of all time.

Felix Francis is the younger of Dick Francis’s two sons. During the last forty years Felix assisted with the research of many of the Dick Francis novels, not least Twice Shy, Shattered, and Under Orders. Since 2006, Felix has taken a more significant role in the writing, first with Dead Heat and then increasingly with the bestsellers Silks, Even Money, and Crossfire, all father-son collaborations. He continued his father’s legacy with Dick Francis’s Gamble and Dick Francis’s Bloodline. He lives in England.

“[A] gripping thriller with a thoroughbred racing backdrop....The solid writing and engaging lead will carry readers along at a brisk pace.”—Publishers Weekly

“[The] master of crime fiction and equine thrills.”—Newsday

“It’s either hard or impossible to read Mr. Francis without growing pleased with yourself: not only the thrill of vicarious competence imparted by the company of his heroes, but also the lore you collect as you go, feel like a field trip with the perfect guide.”—The New York Times Book Review

“A rare and magical talent...who never writes the same story twice...Few writers have maintained such a high standard of excellence for as long as Dick Francis.”—The San Diego Union-Tribune

“Few things are more convincing than Dick Francis at a full gallop.”—Chicago Tribune