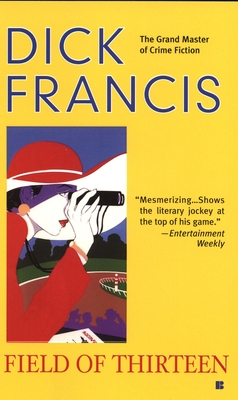 A superbly crafted collection of thirteen tightly plotted tales that treats readers to murder, mystery, and mayhem in the world of horseracing.

“Few things are more convincing than Dick Francis at a full gallop.”—Chicago Tribune

With his remarkable blend of unrelenting suspense, finely tuned narrative, and lean, stylish prose, New York Times bestselling author Dick Francis proves that he is as much a master of the short story as he is of the novel in this thrilling collection.

Dick Francis was born in South Wales in 1920. He was a young rider of distinction winning awards and trophies at horse shows throughout the United Kingdom. At the outbreak of World War II he joined the Royal Air Force as a pilot, flying fighter and bomber aircraft including the Spitfire and Lancaster.

He became one of the most successful postwar steeplechase jockeys, winning more than 350 races and riding for Her Majesty Queen Elizabeth, the Queen Mother. After his retirement from the saddle in 1957, he published an autobiography, The Sport of Queens, before going on to write more than forty acclaimed books, including the New York Times bestsellers Even Money and Silks.

A three-time Edgar Award winner, he also received the prestigious Crime Writers’ Association’s Cartier Diamond Dagger, was named Grand Master by the Mystery Writers of America, and was awarded a CBE in the Queen’s Birthday Honours List in 2000. He died in February 2010, at age eighty-nine, and remains among the greatest thriller writers of all time.

"[Field of Thirteen] starts with a gallop and remains strong throughout." -USA Today

"Mesmerizing...shows the literary jockey at the top of his game." -Entertainment Weekly