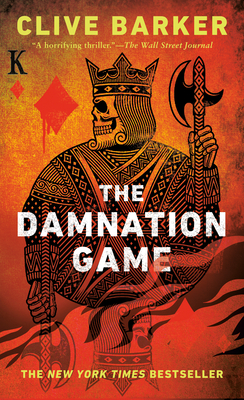 “ONE OF THE BEST HORROR NOVELS IN A VERY LONG TIME...do not miss it!”—USA Today

There are things worse than death. There are games so seductively evil, so wondrously vile, no gambler can resist. Amid the shadow-scarred rubble of World War II, Joseph Whitehead dared to challenge the dark champion of life’s ultimate game. Now a millionaire, locked in a terror-shrouded fortress of his own design, Joseph Whitehead has hell to pay. And no soul is safe from this ravaging fear, the resurrected fury, the unspeakable desire of...

Born in Liverpool in 1952, Clive Barker has written and produced a number of plays, including The History of the Devil and Frankenstein in Love, which are as diverse in style and subject as the fiction he has written since. His volumes of short fiction, Books of Blood, earned him immediate praise from horror fans and literary critics alike. He won both the British and World Fantasy awards, and was nominated for the coveted Booker Prize, Britain’s highest literary award. His bestselling novels include The Damnation Game, Imajica, Coldheart Canyon, The Thief of Always, The Great and Secret Show, Everville, the Abarat series, and The Scarlet Gospels. He is also the creator of the now-classic Hellraiser films as well as Nightbreed and Lord of Illusions.

Praise for The Damnation Game

“A deliciously scary tale...Barker’s brilliantly literary work has raised horror to a level of excellence it has rarely reached before.”—Whitley Streiber

“Original and memorable...engrossing...disturbing...Horror mavens who enjoy violence and harrowing imagery will find plenty of both here. But there is more to The Damnation Game than gore. This story of a supernaturally powerful man who can resurrect the dead probes the many varieties of corruption.”—Publishers Weekly

“Remarkably powerful...Barker has created a truly legendary monster. In pure descriptive power there is no one writing horror fiction now who can match him.”—The Washington Post

“Wonderful, moving and apocalyptic. Death and damnation hang at the end of every chapter. Barker makes us squirm.”—Seattle Post-Intelligencer

“Will fry your eyes off! Keep the lights on.”—Larry King

“A writer of stunning imagination...With his artist’s eye for detail, Barker instills a mythic quality into his vision of hell.”—The Atlanta Journal & Constitution

“The most literate and disturbing horror novel I have ever read. This is the place that nightmares are spawned—read it at your own peril, but read it you must!”—Imagine

“A powerful, thrilling novel that provokes the imagination and raises the blood pressure.”—The Orlando Sentinel

“Powerful...original...Barker’s horror is elegant enough that one can admire it as a kind of hellish choreography, with the characters all dancing to his phantasmagorical tune.”—New York Newsday