The Black Arts: A Concise History of Witchcraft, Demonology, Astrology, Alchemy, and Other Mystical Practices Throughout the Ages (Paperback) 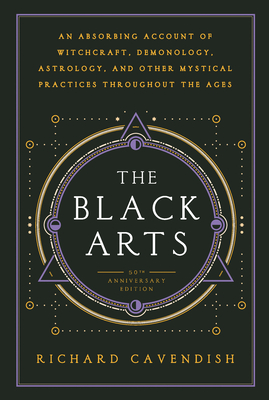 The Black Arts is a fascinating and wonderfully readable exploration of the practice, theory, and underlying rationale of magick and occultism in all its branches, including witchcraft, spells, numerology, astrology, alchemy, kabbalah, tarot, charms, and summoning and control of spirits. This edition features a 50th anniversary introduction by historian of alternative spirituality Mitch Horowitz, who frames the book for a new generation of readers.

Richard Cavendish (1930-2016) was a highly regarded and widely published British historian of magic, myth, and the occult. Educated at Oxford, Cavendish is best remembered for The Black Arts (1967) and for editing the acclaimed 24-volume Man, Myth & Magic: An Illustrated Encyclopedia of the Supernatural, published from 1970 to 1972.

“We are all black magicians in our dreams, in our fantasies, perversions, and phobias... In The Black Arts, Richard Cavendish has not only gathered many fascinating facts from the past and from our own time; he has also presented the philosophy of the black magicians and gives many excellent interpretations of their symbols and rites. He has done all this in such a concise and readable style that the reader is hardly aware of how much effort has gone into this work and how original are many of its ideas and interpretations ...Works such as Cavendish’s are a reminder that we are living in an era of amnesia. We have forgotten those vital truths that man once knew and by whose strength he lived.” —Isaac Bashevis Singer, Book Week

“In The Black Arts, Cavendish captures the human striving and universality behind the magical search. He also demonstrates virtuosity for explaining ancient and more recent rituals, rites, and esoteric philosophies with splendid clarity … It stands nearly alone as a simultaneously comprehensive and inviting guide to the world of pre-modern esoterica.”—Mitch Horowitz, from the new introduction