The Theory of Everything (Hardcover) 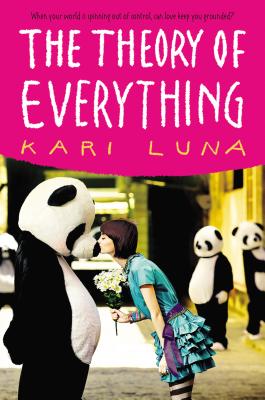 By Kari Luna
Email or call for price.
Not Available at This Time

Sophie Sophia is obsessed with music from the late eighties. She also has an eccentric physicist father who sometimes vanishes for days and sees things other people don t see. But when he disappears for good and Sophie's mom moves them from Brooklyn, New York, to Havencrest, Illinois, for a fresh start, things take a turn for the weird. Sophie starts seeing things, like marching band pandas, just like her dad.

Guided by Walt, her shaman panda, and her new (human) friend named Finny, Sophie is determined to find her father and figure out her visions, once and for all. So she travels back to where it began New York City and NYU's Physics department. As she discovers more about her dad's research on M-theory and her father himself, Sophie opens her eyes to the world's infinite possibilities and her heart to love.
Perfect for fans of"Going Bovine, ""The Perks of Being a Wallflower, Scott Pilgrim vs. The World "and "The Probability of Miracles.

Kari Luna (www.kariluna.com) writes stories, teaches yoga and eats apricots. She also covets cashmere sweaters, collects toysfrom the sixties and thinks soul music is the cure for everything. She lives in Portland, Oregon. You can visit the fictional Sophie Sophia, read her blog, and download mixtapes at www.thetheoryofeverythingbook.com."