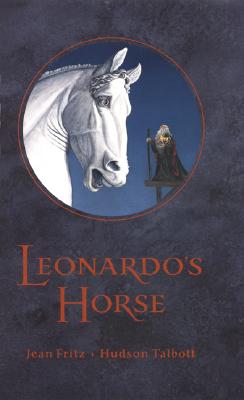 Leonardo’s Horse by Jean Fritz is a unique book that tells two stories.  The first story is about Leonardo da Vinci, who earned a commission from the duke of Milan to create a bronze horse three times larger than life, but never was able to finish the project.  The second story is about an American named Charles Dent who decided to create the sculpture and make it a gift from the American people to the residents of Italy.  This book is a wonderful readalound and an inventive introduction to the Renaissance and one of its masters.  Ages 5 and up.

— From Best Books about... HORSES

"A scintillating sliver of history. . . . An inventive introduction to the Renaissance and one of its masters." (Publishers Weekly, starred review)

"An unusual and surprisingly touching story . . . . An offbeat and intriguing read." (The Bulletin of the Center for Children's Books, starred review)

"Filled with engaging details of Leonardo and his world. . . . Illustrations which range from utterly recognizable scenes of Florence to the ghostly horses at Leonardo's deathbed. . . . An unusual biography for young people, and one well worth poring over . . . . A unique way of picturing a unique world . . . . An extraordinary tribute." (Kirkus Reviews, starred review)

Jean Fritz, the Newbery Honor-winning author of Homesick, is best known for her engaging and enlightening nonfiction for young readers, including What's the Big Idea, Ben Franklin?, And Then What Happened, Paul Revere?, and Shh! We're Writing the Constitution. She was honored with the Knickerbocker Award for Juvenile Literature by the New York State Library Association, and won the Laura Ingalls Wilder Award for her career contribution to American children's literature.