Aliens are Coming!: The True Account of the 1938 War of the Worlds Radio Broadcast (Paperback) 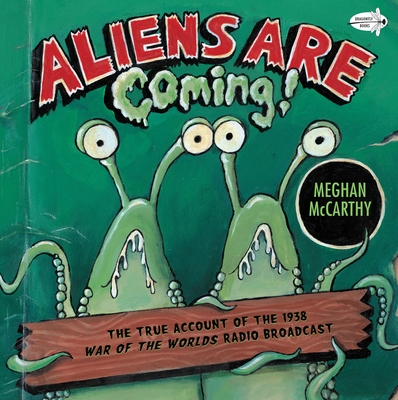 A picture-book account of one of the most famous pieces of radio history!

* “Sandwiched between a look at Depression-era radios and a set of fanciful period advertisements, McCarthy delivers a semi-serious account of the 1938 War of the Worlds broadcast, illustrating both passages from the script and briefly told descriptions of widespread panic with smudgy cartoon scenes featuring bug-eyed monsters and equally bug-eyed people. The author closes with a substantial note that analyzes the broadcast’ immediate and long-term effects, points out that the announcers repeatedly admitted that they were presenting a drama during the broadcast, mentions several later revivals here and internationally and notes the response of H.G. Wells himself to the original production. She has also set up an invitingly designed Web site with an array of relevant links.”
—Kirkus Reviews, Starred

A School Library Journal Best Book of the Year

Meghan McCarthy is the author-illustrator of Astronaut Handbook and Strong Man, which received three starred reviews and was selected as a Society of Illustrators best illustrated book. She resides in Brooklyn, New York.