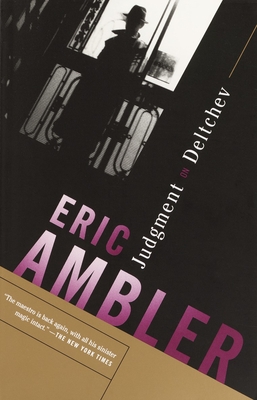 By Eric Ambler
Email or call for price.
Backordered

Foster’s dramatic skill is well-known in London’s West End theaters. So perhaps it wasn’t so surprising when he was hired by an American newspaper publisher to cover the trial of Yordan Delchev for treason. Accused of membership in the sinister Officer Corps Brotherhood and of masterminding a plot to assassinate his country’s leader, Delchev may in fact be a pawn and his trial all show. But when Foster meets Madame Delchev, the accused’s powerful wife, he suddenly become enmeshed in more life-threatening intrigue than he could have imagined.

Eric Ambler is often said to have invented the modern suspense novel. Beginning in 1936, he wrote a series of novels that introduced ordinary protagonists thrust into political intrigue they were ill-prepared to deal with. These novels were touted for their realism, and Ambler established himself as a thriller writer of depth and originality. In the process he paved the way for such writers as John Le Carré, Len Deighton, and Robert Ludlum.

“The maestro is back again, with all his sinister magic intact.” –The New York Times Book Review

“Judgment on Deltchev is a haunted manse–and you’ll venture in at your peril. Once you’re there, you’ll stay till the end.” –The New York Times

“Vintage Ambler . . . readers of intrigue can settle under their reading lamps with a contented sigh.” –Chicago Tribune