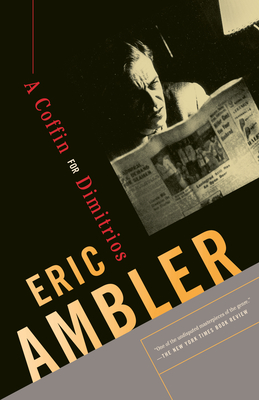 The classic story of an ordinary man seemingly out of his depth, this is Ambler's most widely acclaimed novel, "one of the masterpieces of the genre" (The New York Times Book Review).

A chance encounter with a Turkish colonel leads Charles Latimer, the author of a handful of successful mysteries, into a world of sinister political and criminal maneuvers. At first merely curious to reconstruct the career of the notorious Dimitrios, whose body has been identified in an Istanbul morgue, Latimer soon finds himself caught up in a shadowy web of assassination, espionage, drugs, and treachery that spans the Balkans.

Eric Ambler is often said to have invented the modern suspense novel. Beginning in 1936, he wrote a series of novels that introduced ordinary protagonists thrust into political intrigues they were ill-prepared to deal with. These novels were touted for their realism, and Ambler established himself as a thriller writer of depth and originality. In the process he paved the way for such writers as John Le Carré, Len Deighton, and Robert Ludlum. He was awarded four Gold Daggers and a Diamond Dagger from The Crime Writers Association, named a Grand Master by the Mystery Writers Association, and was made an Officer of the Order of the British Empire by Queen Elizabeth. In addition to his novels, Ambler wrote a number of screenplays, including A Night to Remember and The Cruel Sea, which won him an Academy Award nomination. He died in 1998.

"Anyone who hasn't read Ambler is in for a real treat." --The Washington Post Book World