As She Climbed Across the Table: A Novel (Vintage Contemporaries) (Paperback) 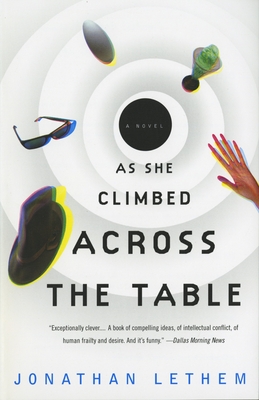 Anna Karenina left her husband for a dashing officer. Lady Chatterley left hers for the gamekeeper. Now Alice Coombs has her boyfriend for nothing … nothing at all.  Just how that should have come to pass and what Philip Engstrand, Alice’s spurned boyfriend, can do about it is the premise for this vertiginous speculative romance by the acclaimed author of Gun, with Occasional Music.
Alice Coombs is a particle physicist, and she and her colleagues have created a void, a hole in the universe, that they have taken to calling Lack. But Lack is a nullity with taste—tastes; it absorbs a pomegranate, light bulbs, an argyle sock; it disdains a bow tie, an ice ax, and a scrambled duck egg. To Alice, this selectivity translates as an irresistible personality. To Philip, it makes Lack an unbeatable rival, for how can he win Alice back from something that has no flaws—because it has no qualities? Ingenious, hilarious, and genuinely mind-expanding, As She Climbed Across the Table is the best boy-meets-girl-meets-void story ever written.

Jonathan Lethem is the author of the novels Gun, with Occasional Music; Amnesia Moon; Girl in Landscape; and Motherless Brooklyn, for which he won the National Book Critics Circle Award. He has also written a collection of stories, The Wall of the Sky, the Wall of the Eye. He lives in Brooklyn, New York.

"Exceptionally clever. . . . A book of compelling ideas, of intellectual conflict, of human frailty and desire. And it's funny."—Dallas Morning News

"Jonathan Lethem has succeeded in delivering a wonderland on the side of the looking glass," —San Francisco Bay Guardian

"Lethem is opening blue sky for American fiction. . . . He is rapidly evolving into his own previously uncataloged species." —Village Voice Literary Supplement