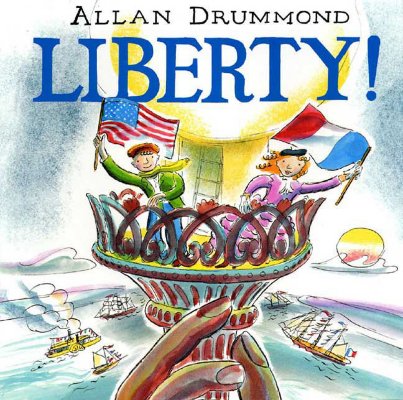 A symbol of freedom – the Statue of Liberty

Here is the story of the exciting day in 1886 when the Statue of Liberty was unveiled to the world. A small boy stands at the foot of the statue, ready to relay a signal to its creator way up in Liberty’s crown, telling him it is time. As anticipation builds, the boy describes the bustling scene in the harbor and on the island – all of New York waiting, including two hundred women suffragists and the President of the United States. In detailed vignettes we see the construction of the statue in France, its voyage to America, and its installation in New York Harbor.

Through rhythmic, evocative prose and energetic pen-and-wash illustrations, we are made to feel the excitement of those gathered to see Liberty’s face for the first time, and to remember all that she represents.

ALLAN DRUMMOND's other books for children include "The"

"Flyers. "He lives in Savannah, Georgia.

"Pen-and-wash illustrations so lively they seem to dance on the page animart a story of the 1886 dedication of the Statue of Liberty . . . Drummond conveys the mounting excitement of the event itself while presenting a cavalcade of characters and incidents." --Starred, Publishers Weekly

"Scenes of the construction of France's gift to the U.S. are
shown in finely wrought, energetic, pen-and-wash images that
swirl through the text, offering something new and exciting at
every turn of the page." - Starred, Booklist

"An excellent introduction to one of our national treasures
and the spirit it embodies." - School Library Journal