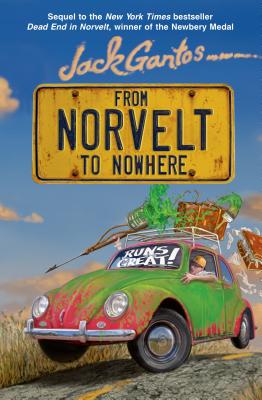 This is book number 2 in the Norvelt Series series.

This rocket-paced follow-up to the Newbery Medal–winning novel Dead End in Norvelt opens deep in the shadow of the Cuban missile crisis. But instead of Russian warheads, other kinds of trouble are raining down on young Jack Gantos and his utopian town of Norvelt in western Pennsylvania. After an explosion, a new crime by an old murderer, and the sad passing of the town's founder, twelve-year-old Jack will soon find himself launched on a mission that takes him hundreds of miles away, escorting his slightly mental elderly mentor, Miss Volker, on her relentless pursuit of the oddest of outlaws. But as their trip turns south in more ways than one, it's increasingly clear that the farther from home they travel, the more off-the-wall Jack and Miss Volker's adventure becomes, in From Norvelt to Nowhere, a raucous road novel about roots and revenge, a last chance at love, and the power of a remarkable friendship.

Jack Gantos has written books for people of all ages, from picture books and middle-grade fiction to novels for young adults and adults. His works include Hole in My Life, a memoir that won the Michael L. Printz and Robert F. Sibert Honors, Joey Pigza Swallowed the Key, a National Book Award Finalist, and Joey Pigza Loses Control, a Newbery Honor book. Jack was born in Mount Pleasant, Pennsylvania, and when he was seven, his family moved to Barbados. He attended British schools, where there was much emphasis on reading and writing, and teachers made learning a lot of fun. When the family moved to south Florida, he found his new classmates uninterested in their studies, and his teachers spent most of their time disciplining students. Jack retreated to an abandoned bookmobile (three flat tires and empty of books) parked out behind the sandy ball field, and read for most of the day. The seeds for Jack’s writing career were planted in sixth grade, when he read his sister’s diary and decided he could write better than she could. He begged his mother for a diary and began to collect anecdotes he overheard at school, mostly from standing outside the teachers’ lounge and listening to their lunchtime conversations. Later, he incorporated many of these anecdotes into stories.  While in college, he and an illustrator friend, Nicole Rubel, began working on picture books. After a series of well-deserved rejections, they published their first book, Rotten Ralph, in 1976. It was a success and the beginning of Jack’s career as a professional writer. Jack continued to write children’s books and began to teach courses in children’s book writing and children’s literature. He developed the master’s degree program in children’s book writing at Emerson College and the Vermont College M.F.A. program for children’s book writers. He now devotes his time to writing books and educational speaking. He lives with his family in Boston, Massachusetts.

“Gantos employs gothic humor, scene-crafting mastery, and Jack's querulous voice to offer a wild and challenging road-trip novel, murder mystery, meditation on American history, and love story all in one.” —The Horn Book

“The book is fast paced and laced with both history lessons and hilarity.” —School Library Journal

“This is a story like no other.” —Jon Scieszka, founder of guysread.com on Dead End in Norvelt

“A brilliant book, full of history, mystery, and laughs.” —Dave Barry, coauthor of the Peter and the Starcatchers series on Dead End in Norvelt