Flying to the Moon: An Astronaut's Story (Hardcover) 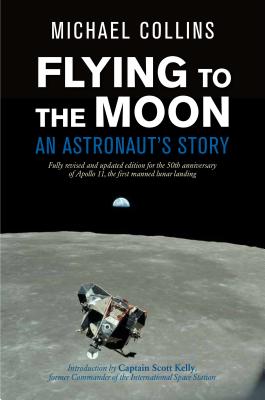 Based on the adult bestseller Carrying the Fire

In time for the 50th anniversary of man's first landing on the moon, this re-release of Michael Collins's autobiography is a bold, sparkling testament to exploration and perseverance.

In this captivating account, space traveler Collins recalls his early days as an Air Force test pilot, his training at NASA, and his unparalleled experiences in orbit, including the Apollo 11 mission, the first manned lunar landing. The final chapter to this autobiography is an exciting and convincing argument in favor of mankind's continued exploration of our universe.

Originally published in 1976 and updated for this new edition, including an introduction from astronaut Scott Kelly, Collins's voice and message are sure to resonate with a new generation of readers.

Michael Collins (1930-2021) was an astronaut, one of 24 who have flown to the moon. A West Point graduate, he was an Air Force jet-fighter pilot and a test-pilot before being recruited by NASA in 1963 as a member of the third astronaut group selected for the Apollo moon project. Lieutenant Colonel Collins flew in the Gemini 10 space mission, orbiting the earth forty-three times in 1966, and piloted the Apollo 11 module for the 1969 lunar mission which put Neil Armstrong and Buzz Aldrin on the moon’s surface.

After NASA, Collins became director of the Smithsonian’s National Air and Space Museum, then under secretary of the Smithsonian Institution, and vice president of the LTV Aerospace and Defense Company. He held the rank of major general when he retired from the Air Force Reserve.


Collins recounted his experiences as an astronaut in the memoirs Carrying the Fire and Flying to the Moon.

“We can all be grateful that the first crew to reach the moon included a born storyteller.” —Kirkus Reviews, starred review

“Several astronauts have written about their experiences, but none so well as Michael Collins. . .This is just the book to give the child whose parents made Yeager and The Right Stuff best sellers.” —The Washington Post Book World