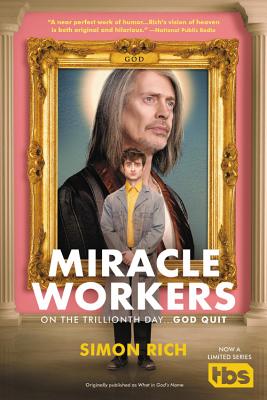 Now a hit TBS comedy: Miracle Workers is "a near perfect work of humor" (NPR) about two underpaid angels working in the Department of Miracles.

Welcome to Heaven, Inc., the grossly mismanaged corporation in the sky. For as long as anyone can remember, the founder and CEO (known in some circles as "God") has been phoning it in. Lately, he's been spending most of his time on the golf course. And when he does show up at work, it's not to resolve wars or end famines, but to Google himself and read what humans have been blogging about him.

When God decides to retire (to pursue his lifelong dream of opening an Asian Fusion restaurant), he also decides to destroy Earth. His employees take the news in stride, except for Craig and Eliza, two underpaid angels in the lowly Department of Miracles. Unlike their boss, Craig and Eliza love their jobs — uncapping city fire hydrants on hot days, revealing lost keys in snow banks — and they refuse to accept that earth is going under.

The angels manage to strike a deal with their boss. He'll call off his Armageddon, if they can solve their toughest miracle yet: getting the two most socially awkward humans on the planet to fall in love. With doomsday fast approaching, and the humans ignoring every chance for happiness thrown their way, Craig and Eliza must move heaven and earth to rescue them -- and the rest of us, too.

Simon Rich has written for "Saturday Night Live," Pixar, and "The Simpsons." He is the creator and showrunner of "Man Seeking Woman" (FXX) and "Miracle Workers," (TBS), which he based on his books. His other collections include Hits and Misses, Spoiled Brats, and Ant Farm. He is a frequent contributor to The New Yorker.

"As unpredictable as it is funny, and one of the best American comic novels of the past few years... A near-perfect work of humor writing--strikingly original, edgy but compassionate, and most importantly, deeply hilarious."—Michael Schaub, NPR

"Hilarious and touching...Rich is crazy good at hysterical sharp dialogue. But the bonus here is that his head is matched by his heart. Rich lends the potentially gimmicky story real emotional heft and avoids condescending to his characters (or readers)."—Entertainment Weekly

"His imagined situations read like sketches he might have conceived at his old job as a writer for Saturday Night Live... Rich knows how to balance the smart with the funny."—New York Times Book Review

"One of the funniest books you'll read this year."—Publishers Weekly

"Sweetly funny and even moving; love, in this case, is what makes the world keep spinning."—Boston Globe