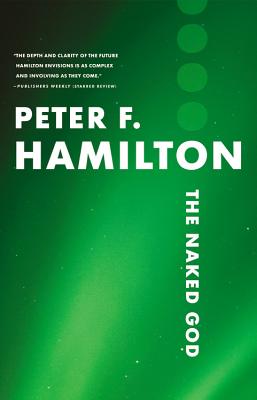 The Confederation is starting to collapse politically and economically, allowing the `possessed' to infiltrate more worlds.

Quinn Dexter is loose on Earth, destroying the giant arcologies one at a time. As Louise Kavanagh tries to track him down, she manages to acquire some strange and powerful allies whose goal doesn't quite match her own. The campaign to liberate Mortonridge from the possessed degenerates into a horrendous land battle, the kind which hasn't been seen by humankind for six hundred years; then some of the protagonists escape in a very unexpected direction. Joshua Calvert and Syrinx fly their starships on a mission to find the Sleeping God -- which an alien race believes holds the key to overthrowing the possessed.

Peter F. Hamilton was born in Rutland, England in 1960. He began writing in 1987, and sold his first short story to Fear magazine in 1988. He has also been published in Interzone and the In Dreams and New Worlds anthologies, and several small press publications. His first novel was Mindstar Rising, published in 1993, and he has been steadily productive since then. Peter lives near Rutland Water with his wife and two children.