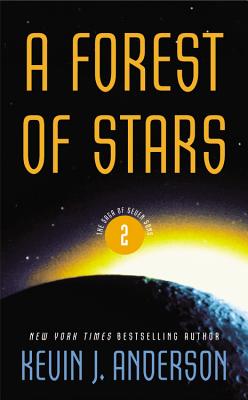 This is book number 2 in the The Saga of Seven Suns series.

Five years have passed since humans set fire to the gas-giant planets, unwittingly committing genocide of the Hydrogues-an infinitely powerful species of aliens-and igniting a war of epic proportions.

Five years after attacking the human-colonized worlds of the Spiral Arm, the enigmatic hydrogues maintain absolute control over the galaxy's gas-giant planets. Still reeling from renewed attacks by the hydrogues, the Terran rulers don't realize the dangers they face. The Ildirans, believed to be allies, are abducting humans for breeding experiments. Far-flung colonies plan a rebellion--an military robots, used to build cybernetic legions to fight the war, have secretly exterminated their own makers--and may soon turn on mankind.

Five years ago, humans thought they ruled the cosmos. Today they are the galaxy's most endangered species.

Kevin J. Anderson has written forty-six national bestsellers and has over twenty million books in print worldwide in thirty languages. He has been nominated for the Nebula Award, the Bram Stoker Award, and the SFX Readers' Choice Award. Find out more about Kevin Anderson at www.wordfire.com.