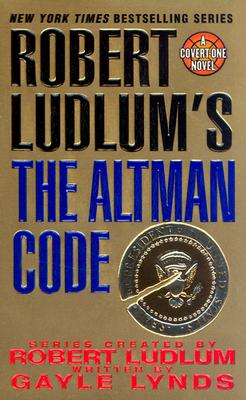 By Robert Ludlum, Gayle Lynds
$7.99
Email or call for price.

When word reaches the President of the United States that a Chinese cargo ship is transporting chemicals to a rogue nation intent on creating new biological weapons, the president knows he must act quick to obtain the proof he needs.

Covert-One agent Jon Smith is sent to rendezvous in Taiwan with another agent who has acquired the ship's true manifest. But before Smith can get the document, he is ambushed, the second agent is murdered, and the evidence is destroyed. Smith escapes with only his life and a verbal message-the president's biological father is still alive, held prisoner by the Chinese for fifty years. As the mysterious ship draws closer to its end port, Smith is losing time in uncovering the truth about the vessel and its cargo-a truth that probes the secrets of the Chinese ruling party, the faction in Washington working to undermine the elected government, and the international cabal who is thrusting the world to the brink of war...

Robert Ludlum was the author of 25 thriller novels, including "The Bourne Identity," "The Bourne Supremacy" and "The Bourne Ultimatum"--the books on which the international hit movies were based--and "The Sigma Protocol." He was also the creator of the Covert-One series. Born in New York City, Ludlum received a B.A. from Wesleyan University, and before becoming an author, he was a United States Marine, a theater actor and producer. Gayle Lynds is the bestselling, award-winning author of several international espionage thrillers, including "Masquerade, The Coil," and "The Last Spymaster." A member of the Association for Intelligence Officers, she is cofounder (with David Morrell) of ITW (International Thriller Writers). She lives in Santa Barbara.

"Ludlum stuffs more surprises into his novels than any other six-pack of thriller writers combined."-The New York Times

"Ludlum pulls out all the stops, and dazzles his readers."-Chicago Tribune

"Robert Ludlum continues to jolt his readers with fresh juice...a page-turner of non-stop action that should leave his fans begging for more."-New York Post

"Dazzling...a clean launch of the 80's spy novel into a thrilling action/adventure web of intrigue mean for the twenty-first century."-Publishers Weekly

"Readers will remain in the dark right up until the explosive climax."-The San Francisco Chronicle

"Don't ever begin a Ludlum novel if you have to go to work the next day."--Chicago Sun-Times