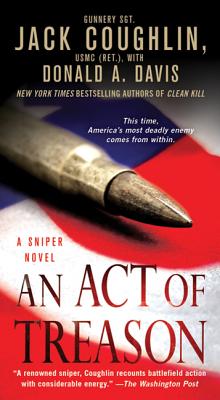 By Sgt. Jack Coughlin, Donald A. Davis
Email or call for price.
Not Available at This Time

This is book number 4 in the Kyle Swanson Sniper Novels series.

An Act of Treason

Gunnery Sergeant Kyle Swanson and his beautiful girlfriend, CIA agent Lauren Carson, are on a mission in Islamabad, Pakistan. During a dangerous assault on two Taliban fighters, Kyle finds himself captured and imprisoned. Lauren, meanwhile, is accused by the CIA of being a double agent. Fearing for their lives, it seems there's only one man left they can trust…

His name is Jim Hall. A legendary CIA agent, Kyle's sniper mentor, and Lauren's boss and former lover, he's the one who sent them on the black operation to begin with. But Hall has gone rogue: He's agreed to sell America's innermost secrets to a ruthless Pakistani warlord who wants to mold al-Qaeda into a legitimate political party and secure a nuclear arsenal. Now the only way the U.S. government can put an end to this deadly plot pivots on whether Kyle can put a stop to Hall—the man he once idolized, who taught him everything he knows…

Donald A. Davis is co-author of New York Times bestseller Shooter: The Autobiography of the Top-Ranked Marine Sniper and author of Lightning Strike: The Secret Mission to Kill Admiral Yamamoto and Avenge Pearl Harbor. He lives outside Boulder, Colorado.

“The cat-and-mouse game that ensues between the two adversaries will have readers frantically turning pages. Series fans will enjoy the roller-coaster ride, and military-fiction buffs new to the series will find this episode a great place to start.” —Booklist

“The pages fly by as Swanson must face his most personal mission yet. The military tactics take a backseat to the characters, creating a strong and compelling narrative. Coughlin and Davis have concocted another winner that should only encourage a growing readership.” —Booklist on "Clean Kill: A Sniper Novel"

“The [plot] propels the pages forward, but this one isn't all about action: Swanson proves a surprisingly complex character...Dead Shot suggest[s] a hardware-heavy story that only an armed- services veteran could love. Surprisingly, it's completely the opposite. Readers will be compelled...and will look forward to another Swanson adventure.” —Bookliston "Dead Shot: A Sniper Novel"

“Tight, suspenseful…Here's hoping this is the first of many Swanson novels.” —Booklist on "Kill Zone: A Sniper Novel"

“One of the best snipers in the Marine Corps, perhaps the very best. When I asked one of his commanders about his skills, the commander smiled and said, ‘I'm just glad he's on our side.'” —Peter Maass, war-correspondent and bestselling author of Love Thy Neighbor on "Shooter"

“The combat narratives here recount battlefield action with considerable energy . . . A renowned sniper, Coughlin is less concerned with his tally than with the human values of comradeship and love.” —The Washington Post on "Shooter"

“Coughlin is a sniper, perhaps one of the most respected and feared in the Corps, and his memoir, Shooter, offers a uniquely intimate look into the life of one trained to live in the shadows . . . some of the most poignant action ever recorded in a modern Marine memoir.” —Seapower magazine on "Shooter"