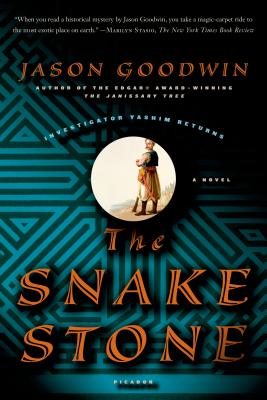 This is book number 2 in the Investigator Yashim series.

Detective, polyglot, chef, eunuch--Investigator Yashim returns in this evocative Edgar® Award–winning series set in Istanbul at the end of the Ottoman Empire

Istanbul, 1838. In his palace on the Bosphorus, Sultan Mahmud II is dying and the city swirls with rumors and alarms. The unexpected arrival of a French archaeologist determined to track down lost Byzantine treasures throws the Greek community into confusion. Yashim Togalu is once again enlisted to investigate. But when the archaeologist's mutilated body is discovered outside the French embassy, it turns out there is only one suspect: Yashim himself. As the body count starts to rise, Yashim must uncover the startling truth behind a shadowy society dedicated to the revival of the Byzantine Empire, encountering along the way such vibrant characters as Lord Byron's doctor and the Sultan's West Indies–born mother, the Valide. With striking wit and irresistible flair, Jason Goodwin takes us into a world where the stakes are high, betrayal is death--and the pleasure to the reader is immense.

JASON GOODWIN is the Edgar Award–winning author of the Investigator Yashim series. The first five books—The Janissary Tree, The Snake Stone, The Bellini Card, An Evil Eye, and The Baklava Club—have been published to international acclaim, alongside Yashim Cooks Istanbul, a cookbook of Ottoman Turkish recipes inspired by the series. Goodwin studied Byzantine history at Cambridge and is the author of Lords of the Horizons: A History of the Ottoman Empire, among other award-winning nonfiction. He lives with his wife and children in England.

“When you read a historical mystery by Jason Goodwin, you take a magic carpet ride to the most exotic place on earth.” —Marilyn Stasio, The new York Times Book Review

“A sinuous novel . . . Mr. Goodwin uses rich historical detail to elevate the books in this series far above the realm of everyday sleuthing. . . . Yashim moves charmingly across the book's complicated landscape. Whether he is stopping to cook, chat, cogitate, interrogate, or renew old acquaintances at the harem, he is a detective with a difference . . . a warmly appealing character.” —Janet Maslin, The New York Times

“The real pleasure of The Snake Stone lies in its powerful evocation of the cultural melting pot that was nineteenth-century Istanbul. . . . Goodwin's sharp eye combines with a poetic style to bring the city vividly to lief.” —Clare Clark, The Washington Post

“Beguiling . . . You will blissfully lose yourself in Istanbul's winding back alleys and linger awhile in the city's bustling fleshpots and meet Lord Byron's physician as you watch the serenely intelligent and intuitive Yashim investigate.” —Rod Cockshutt, The News & Observer