The Eagle's Prey: A Novel of the Roman Army (Eagle Series #5) (Paperback) 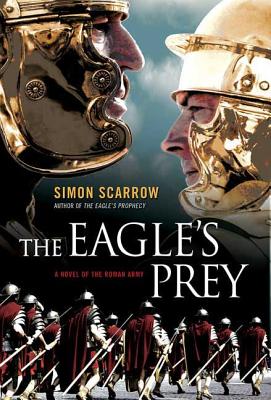 This is book number 5 in the Eagle Series series.

It is late summer a.d. 44 and the battle-weary Roman legions are in their second year of campaigning against the British tribes. The troops' commander, General Plautius, is under considerable pressure from the emperor to crush the natives once and for all. Centurions Macro and Cato are with the crack Second Legion under the precarious leadership of Centurion Maximus and it is their task to hold a ford across the river Tamesis when the natives are forced into a trap.

But Maximus's nerve breaks at the critical point, allowing the enemy leader, Caratacus, and his men to escape. Outraged by this failure, General Plautius orders the annihilation of the unit. Their choice: die or escape to become fugitives pursued by soldiers of their own ruthless army. Hiding from their former comrades, as well as the Britons, Cato's small band of fugitives have only one chance to redeem themselves before they are hunted down like animals.

“Scarrow's combat is brutal and sanguinary; his imperial politics are almost as sharp. Fast paced, building to a satisfyingly high pitch . . . Scarrow hits his stride with this fluid post-Caligula bloodbath.” —Publishers Weekly

“Scarrow's legionary adventures have put guts back into historical writing. His great knowledge of the period is allied to a talent for taking you right into the thick of the action to share the blood, sweat, horror, and exhilaration of battle.” —The Northern Echo