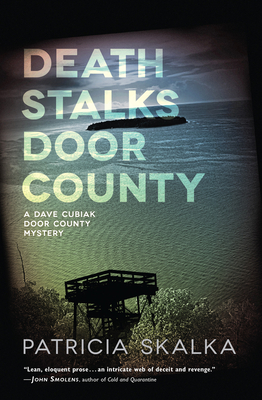 Six deaths mar the holiday mood as summer vacationers enjoy Wisconsin’s beautiful Door County peninsula. Murders, or bizarre accidents? Newly hired park ranger Dave Cubiak, a former Chicago homicide detective, assumes the worst but refuses to get involved. Grief-stricken and guilt-ridden over the loss of his wife and daughter, he’s had enough of death.
Forced to confront the past, the morose Cubiak moves beyond his own heartache and starts investigating, even as a popular festival draws more people into possible danger. In a desperate search for clues, Cubiak uncovers a tangled web of greed, betrayal, bitter rivalries, and lost love beneath the peninsula’s travel-brochure veneer. Befriended by several locals but unsure whom to trust or to suspect of murder, the one-time cop tracks a clever killer.
In a setting of stunning natural beauty and picturesque waterfront villages, Death Stalks Door County introduces a new detective series, “The Dave Cubiak Door County Mysteries.”

Patricia Skalka is the author of Death at Gills Rock, the second book in the Dave Cubiak Door County Mystery series. A former writer for Reader’s Digest, she presents writing workshops throughout the United States. She divides her time between her native Chicago and her cottage in Door County, Wisconsin.

“Lean, eloquent prose . . . an intricate web of deceit and revenge.”—John Smolens, author of Cold and Quarantine


“A mesmerizing mystery, bucolic setting, bodies dropping everywhere, plenty of prime suspects, and in Dave Cubiak, a man with a tragic past, the right guy to solve it.”—Charles Salzberg, author of Shamus Award–nominated Swann's Last Song and Devil in the Hole

“A terrific mystery that captures both the beauty and wildness of this wonderful peninsula.”—Mary Logue, author of the Claire Watkins mystery series


“Can a big-city cop solve a series of murders whose only witnesses may be the hemlocks? An atmospheric debut.”—Kirkus Reviews


“Skalka’s descriptions of the atmosphere of the villages and spectacular scenery will resonate with readers who have spent time on the Door Peninsula. . . . [She] plans to continue disturbing the peace in Door County for quite a while, which should be a good thing for readers.”—Chicago Book Review


“The puzzle is a difficult one to solve, with suspicion continually shifting as more evidence is uncovered. . . . An impressive first novel.”—Mystery Scene