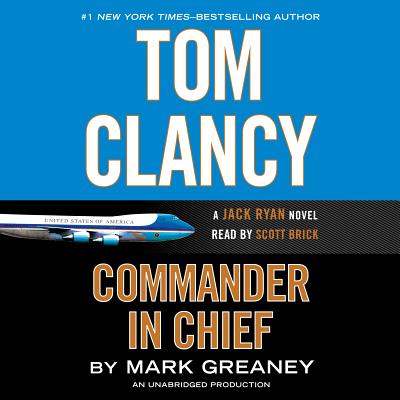 This is book number 15 in the A Jack Ryan Novel series.

This electrifying thriller in the #1 New York Times bestselling series has President Jack Ryan and his allies facing a treacherous foe threatening to unleash chaos around the globe...

When Russian President Valeri Volodin’s ambitions are foiled in Dagestan, he faces a difficult choice. The oligarchs who support him expect a constant flow of graft, but with energy prices cratering, the Russian economy sputters to a virtual halt. Unable to grow the Russian market at home, his hold on power relies on expansion abroad—a plan that has been thwarted by the United States in the past.

But this time Volodin has determined that an indirect approach is the best. A floating natural gas facility in Lithuania is blown up. A Venezuelan prosecutor is assassinated. A devastating attack on a Russian troop train kills dozens. A chaotic world is the best camouflage for a series of seemingly unrelated attacks.

Only one man recognizes an ominous pattern in the reports of terror from around the globe. U.S. President Jack Ryan sees a guiding hand in the worldwide chaos, but before he can act he needs proof.

While his intelligence agencies race to uncover the truth behind the attacks, the President struggles to unite a fractious and distrustful coalition of Western nations against the schemes of the Russian dictator.

With five thousand Russian troops poised to invade a NATO nation, can Jack Ryan move swiftly enough to stop Volodin’s grand plan of global conflict and conquest? Or will he succeed in changing the balance of world power forever?

A little more than thirty years ago Tom Clancy was a Maryland insurance broker with a passion for naval history. Years before, he had been an English major at Baltimore’s Loyola College and had always dreamed of writing a novel. His first effort, The Hunt for Red October, sold briskly as a result of rave reviews, then catapulted onto the New York Times bestseller list after President Reagan pronounced it “the perfect yarn.” From that day forward, Clancy established himself as an undisputed master at blending exceptional realism and authenticity, intricate plotting, and razor-sharp suspense. He passed away in October 2013.

Mark Greaney has a degree in international relations and political science. He is the author of the New York Times bestsellers Tom Clancy Support and Defend, Tom Clancy Full Force and Effect, Tom Clancy Commander in Chief, and Tom Clancy True Faith and Allegiance. With Tom Clancy he coauthored Locked On, Threat Vector, and Command Authority. He has written six books in his own Gray Man series: Gunmetal Gray, Back Blast, Dead Eye, Ballistic, On Target, and The Gray Man. In his research for these novels, he traveled to fifteen countries, and trained alongside military and law enforcement in the use of firearms, battlefield medicine, and close-range combat tactics.

“AN A+, A TOUCHDOWN...Greaney has once again done fans proud, putting forth a thrilling plotline with the ultimate twists and turns, and some good, old-fashioned espionage to keep everyone on their toes...There have always been die-hard Clancy fans, but Mark Greaney, the fantastic writer of The Gray Man series, deserves a huge standing ovation for putting together yet another unforgettable Jack Ryan thriller!”—Suspense Magazine

“In the best tradition of Clancy...Fans of military action thrillers will be well satisfied.”—Publishers Weekly