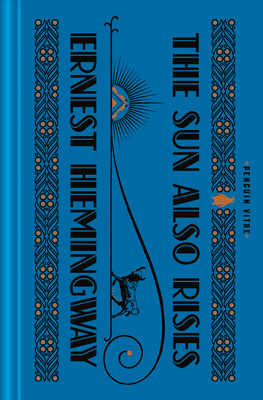 A collectible hardcover edition of Hemingway’s classic novel of post-war disillusionment—the emblematic novel of the Lost Generation—featuring an introduction by Amor Towles, the multimillion-copy bestselling author of The Lincoln Highway, A Gentleman in Moscow, and Rules of Civility

It's the early 1920s in Paris, and Jake, a wounded World War I veteran working as a journalist, is hopelessly in love with charismatic British socialite Lady Brett Ashley. Brett, however, settles for no one: an independent, liberated divorcée, all she wants out of life is a good time. When Jake, Brett, and a crew of their fellow expatriate friends travel to Spain to watch the bullfights, both passions and tensions rise. Amid the flash and revelry of the fiesta, each of the men vies to make Brett his own, until Brett’s flirtation with a confident young bullfighter ignites jealousies that set their group alight.

An indelible portrait of what Gertrude Stein called the Lost Generation—the jaded, decadent youth who gave up trying to make sense of a senseless world in the disaffected postwar era—The Sun Also Rises, Ernest Hemingway’s beloved first novel, is a masterpiece of modernist literature and one of the finest examples of the distinctly spare prose that would become his legacy to American letters.

Penguin Vitae—loosely translated as “Penguin of one’s life”—is a deluxe hardcover series from Penguin Classics celebrating a dynamic and diverse landscape of classic fiction and nonfiction from seventy-five years of classics publishing. Penguin Vitae provides readers with beautifully designed classics that have shaped the course of their lives, and welcomes new readers to discover these literary gifts of personal inspiration, intellectual engagement, and creative originality.

Ernest Hemingway (1889-1961) wrote in a clear, spare, deceptively simple style that made him one of the most admired and imitated authors of the twentieth century. Born in Chicago, he traveled widely throughout his life, living in Italy, France, Spain, and Cuba, and reporting from the frontlines of World War I, the Spanish Civil War, and World War II. His best-known novels are The Sun Also Rises, A Farewell to Arms, For Whom the Bell Tolls, and The Old Man and the Sea, which won the Pulitzer Prize in 1953. A year later Hemingway won the Nobel Prize in Literature.

Amor Towles (introduction) is the multimillion-copy bestselling author of The Lincoln Highway, A Gentleman in Moscow, and Rules of Civility. Born and raised in the Boston area, he now lives in Manhattan.

“It is a testament to Hemingway’s skill as a storyteller that nearly a hundred years after its publication, The Sun Also Rises remains deeply satisfying. . . . Despite the passage of the decades, we continue . . . to be attracted to the company of these bon vivants.” —Amor Towles, from the Introduction

“The ideal companion for troubled times: equal parts Continental escape and serious grappling with the question of what it means to be, and feel, lost . . . [The] themes he touches on—how to make sense of a time in crisis, how to find authenticity and meaning out of upheaval—are as pertinent as they’ve ever been.” —The Wall Street Journal

“Hemingway’s first, and best, novel . . . A literary landmark that earns its reputation as a modern classic.” —The Guardian