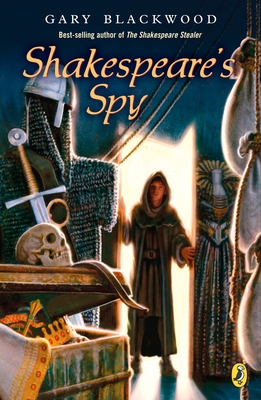 By Gary Blackwood
Email or call for price.
Backordered

Things are disappearing mysteriously from Will Shakespeare's acting company, and it looks like an inside job. Everyone's eyes are on Widge, the orphan boy turned actor, and former thief. Widge knows better than anyone that Shakespeare's plays must be protected at all costs. In order to prove his innocence and clear his name, Widge must learn a new role: spy. But can he dig through the suspects and skulduggery and catch the true culprit?

Gary L. Blackwood sold his first story when he was nineteen, and has been writing and publishing stories, articles, plays, novels, and nonfiction books regularly ever since. His stage plays have won awards and been produced in university and regional theatre. Nonfiction subjects he's covered include biography, history, and paranormal phenomena. His juvenile novels, which include WILD TIMOTHY, THE DYING SUN, and THE SHAKESPEARE STEALER, are set in a wide range of times and places, from Elizabethan England to a parallel universe. Several have received special recognition and been translated into other languages. He and his wife and kids live outside Carthage, MO.

Intriguing. . . . A fast-paced tale of Elizabethan England that fans of the earlier novels will love. (School Library Journal)