A Ballad of the Civil War (Paperback) 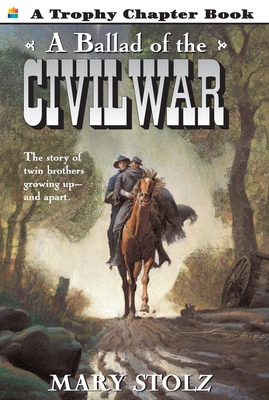 From Newbery Honor-winning author Mary Stoltz comes a poignant and realistic story of brother pitted against brother during the Civil War. This chapter book is an excellent choice to share during homeschooling, in particular for children ages 6 to 8 who are ready to read independently.

Tom Rigby didn't think that anything could ever come between him and his twin, Jack. But things begin to change when Tom learns that they are not allowed to play with their friend Aaron anymore because he's a slave. Tom is upset, but Jack doesn't seem to care. All Jack cares about is playing soldier.

Eleven years later, when war breaks out, Jack joins the Confederation army. But Tom can't bring himself to fight for a cause he doesn't believe in—slavery. So Tom rides north to join the Union army—even though he knows he may one day have to face his brother on the battlefield.

Mary Stolz (1920–2006) published her first book for young people in 1950 with Ursula Nordstrom and never looked back. She wrote more than sixty books, which were published in nearly thirty languages, and received two Newbery Honors (for Belling the Tiger and The Noonday Friends). She was also the recipient of the Kerlan Award, which honored her entire body of work.

Sergio Martinez was born and lives in Mexico City. He illustrated Weapons & Warfare by Milton Meltzer. His paintings have been exhibited in galleries around the world.