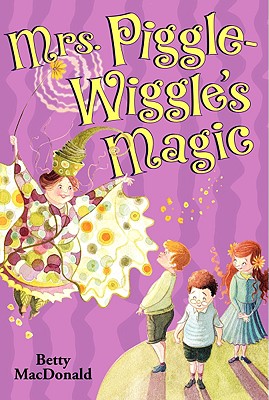 By Betty MacDonald, Alexandra Boiger (Illustrator)
$5.99
On Our Shelves Now

A classic story from one of the most beloved children's book authors!

Mary Poppins meets Nanny McPhee in Mrs. Piggle-Wiggle's Magic, a hilarious and charming picture book about a magical problem solver that has been delighting readers for generations.

Parents love Mrs. Piggle-Wiggle because she can cure children of any bad habit. Children love her because she’s tons of fun! When Mrs. Burbank is in despair because her children become Thought-You-Saiders, or Mrs. Rogers’ sanity and crockery are threatened as Sharon turns into a Heedless Breaker, Mrs. Piggle-Wiggle produces a magical potion that takes care of the problem.

Alexandra Boiger grew up in Munich, Germany, where she studied graphic design and began a career in feature animation that allowed her to work for Warner Bros. UK and DreamWorks. Since transitioning to children’s book illustration, she has worked on numerous popular titles, including the Tallulah series. She lives with her husband and daughter in northern California. See more of her work online at www.alexandraboiger.com.