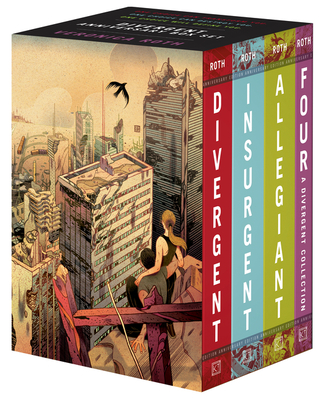 Celebrate the tenth anniversary of the publication of Divergent with a special edition four-book boxed set of the #1 New York Times bestselling series that captured the hearts of millions of readers and inspired a series of major motion pictures starring Shailene Woodley. Each book in the set includes exclusive content from Veronica Roth and beautiful reimagined cover art from award-winning illustrator Victo Ngai.

The Histories of the Factions: Dauntless, Amity, Abnegation, Candor, and Erudite

What's in a Name? Essay

In-depth Q&A with Veronica Roth about the characters of Caleb, Johanna, the Amity faction, and The Factionless

We Can Be Mended

Veronica Roth is the #1 New York Times bestselling author of Divergent, Insurgent, Allegiant, Four: A Divergent Collection, and Carve the Mark. Ms. Roth and her husband live in Chicago. You can visit her online at www.veronicarothbooks.com.